We are floating, floating on windy roads, the thick forest obscured by a smoky fog. Trees grow taller and taller. It is morning, and darkly beautiful, in stark contrast to our morning stop in the sunny Yakima Valley for the best fruit we’ve ever had, purchased at a roadside stand fresh from the grower.

We are driving into the mountains on scenic WA 12, immersing ourselves in a place of unbelievable beauty, even though we can’t see much of it. The smoke thickens as we drive deeper into the mountains, and visibility is about 1/4 mile. Just before we lose cell service, we look at an interactive wildfire map and see there is a large fire burning in the Wenatchee National Forest just south of the park. Is this the disturbing new normal in the western U.S.?

After a super-fun visit with family in Salt Lake City and “inside time” away from the tent, (not many pictures taken, I’ll combine in a post with our second visit to SLC in October), we are on the road again. This is our second re-route of the trip. Our visit to Grand Tetons, Yellowstone, and Glacier are cut from this trip due to a wildfire in Glacier National Park that has the Western half of the park closed.

So many fires are burning, the smoke hangs heavy in the sky from the time that we leave SLC. After more than 10 hours of driving and no energy to set up camp, we splurge for a hotel in Prosser, WA – a surprisingly expensive place to stop. The air quality in the Pacific Northwest is it’s worst in modern history. Watching the Seattle Mariner’s game, one can actually see the particulates in the air, and we wonder how an outfielder can even see a fly ball coming. Realizing that visibility is so poor that we won’t be able to see any mountains or city vistas, we decide we will spend one night in low elevation at Mt. Rainier National Park now then head for the coast, where offshore winds have started clearing skies.

Luckily we arrive early enough to find a large campsite at the Ohanapecosh Campground on the south side of the park. Camping below towering Douglas fir, western red cedar, and western hemlocks is a special experience.

We day hike through old growth forest via the Silver Falls trail, connect with the East Side trail, and through the Grove of the Patriarchs, where the biggest of these evergreen trees live. We are blown away by the age, size, and character of these monster trees. 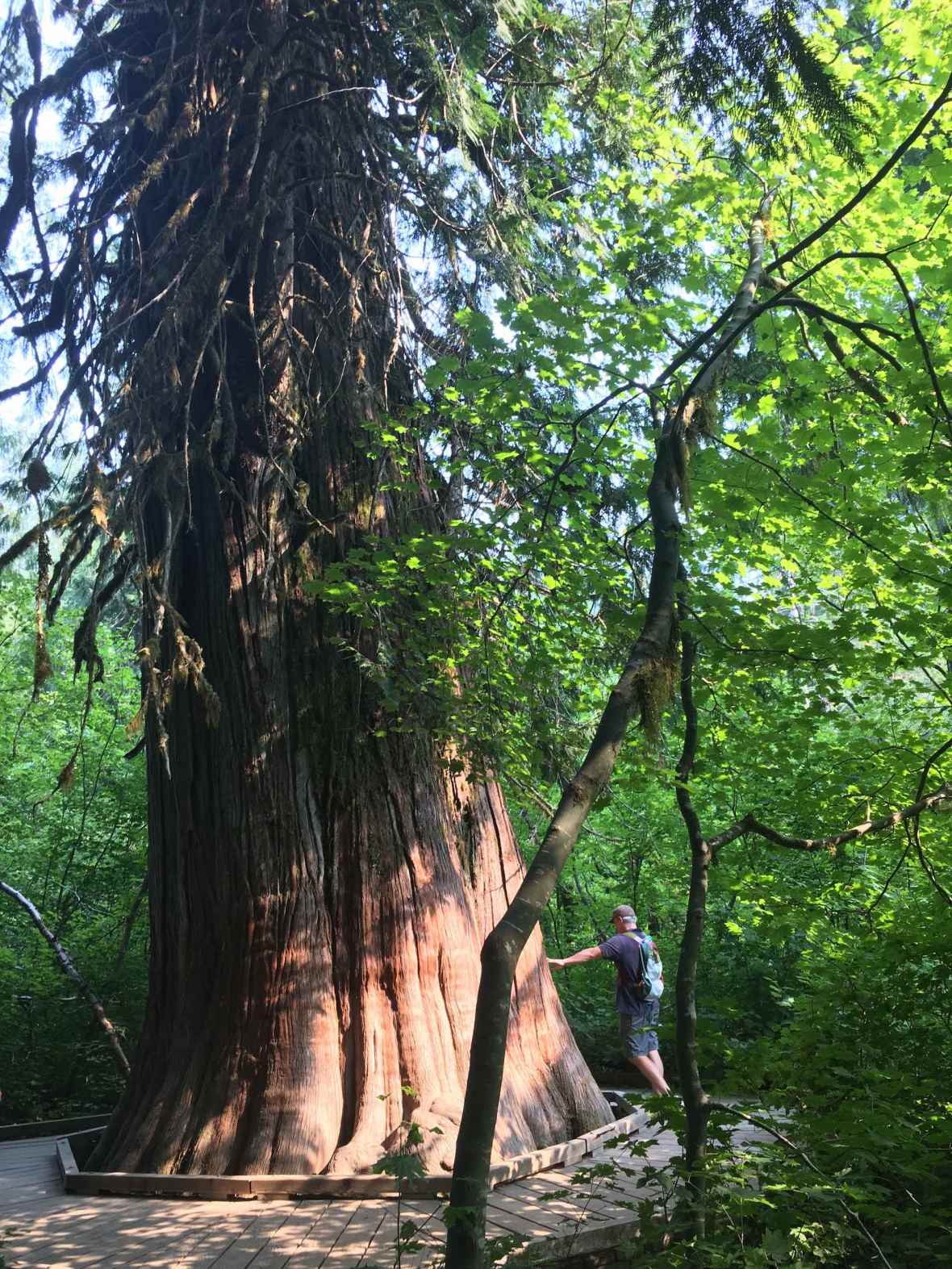 A traffic backup at the swinging bridge on the hike back gives us the idea to instead cross the crystal-clear, shallow river.

Robert goes first, but about 3/4 the way over says his legs are so numb that he almost froze in place. I play it safe and stand in line to cross the bridge, but later wish I’d braved the icy river.

Silver Falls is spectacular. For scale, that tiny orange dot at the top of the falls is a man.

One night is not enough in this park. We reluctantly leave the next day but plan to return in clearer skies in a couple of weeks to see the northern, higher elevation side of the park  and views of Mt. Rainier.

Sidenote: We drove through Idaho Falls en route, and the city looks quite interesting for a future visit (our intended stay in Idaho was also nixed due to smoke, evident in the pictures below). Kayakers float the Snake river deep in the canyon, and base jumpers come from all over the world to jump the Perrine bridge.

The Idaho Falls stop was prompted by Robert’s childhood memory of Evel Kneivel’s (failed) attempt to jump over the Snake River. The dirt jump ramp is still there and visible, about a mile from the Perrine Bridge. Oddly, Evel Knievel will become a theme  that repeats itself a number of times in our travels.

If you’d like to catch up on our Washington travels so far, click here to see our series of Washington posts.