Although Lassen Volcanic National Park is one of our lesser-known U.S. national parks, I share the opinion of many visitors in believing that it is one of the true gems of our park system. The park was established in August of 1916, making it one of our earliest national parks. Within the park boundaries are more than 30 volcanic domes and nine hydrothermal spots.

Hint: If you find the photos at the beginning of my post a little too educational, keep scrolling down, as the views along today’s hike are sublime.

On this trip we will travel the length of the red line (Hwy 89) north to south, but oh boy would I like to come back  for a backpacking trip one day. Just look at all of those backcountry trails! 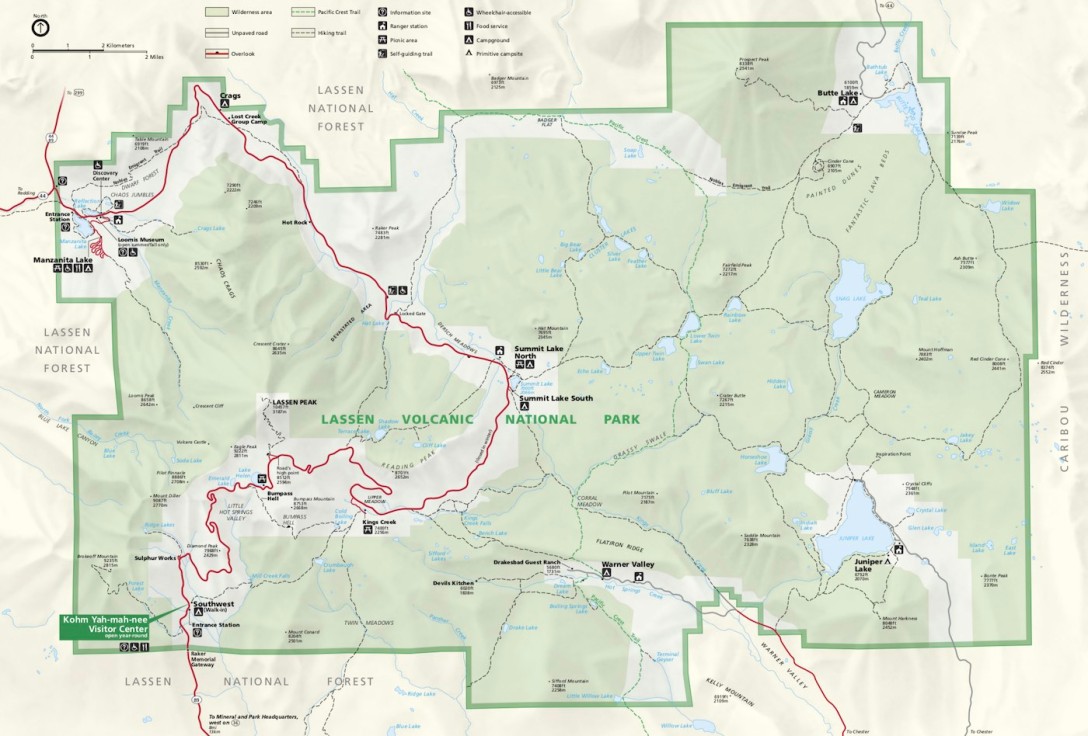 While we are here (3rd week of September), days reach the 60’s and are sunny and warm enough for layers: lightweight hiking pants, short sleeved shirt, and a lightweight fleece. Nights cool off to near freezing, so after dark we add a vest or jacket, gloves and hats.

Three of the six campgrounds along Hwy 89 have already closed for the season, although  this year that is likely due to the usual autumn decline in visitor numbers and not an early snowfall. This park can see 600-700 inches of snow annually, and it is not uncommon to see snowfalls as late as June or occasionally as early as August.

After a quiet night at the Manzanita Lake campground, we awake with renewed energy, eager to explore as much of Lassen Volcanic National Park as possible in our two full days here.

The Loomis Museum is located near the northwest entrance of the park, quite close to our campground. The museum is our first stop, and here we will read about Lassen Peak’s volcanic activity and the history of the park. 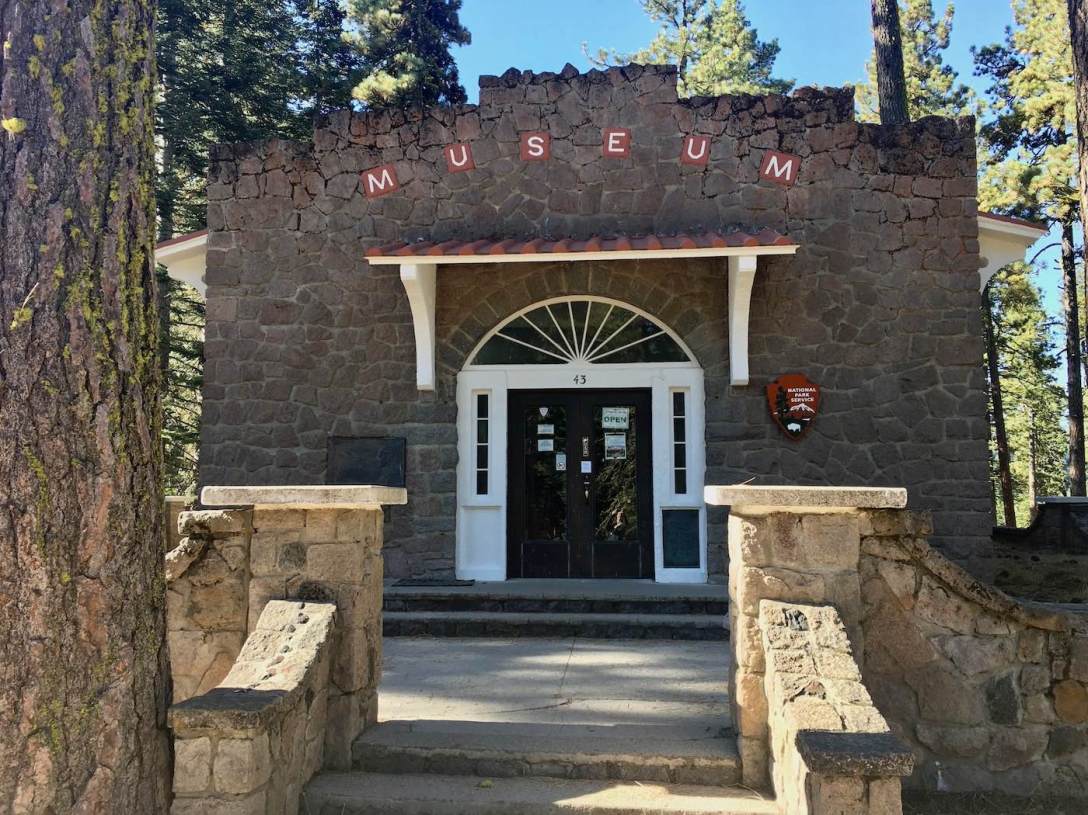 The Loomis Museum is named for Benjamin Franklin (B.F.) Loomis, a local homesteader and photographer who built the museum in 1927 on his property, which at that time was just outside the park boundary. Loomis had photographed the 1914-1915 eruptions, promoted the national park’s establishment, monitored and studied the volcano’s geologic activity, and developed the museum collection. The home where Loomis and his wife Estella lived still stands near the museum and is still used by the park service.

A number of Loomis’s photographs and much of his equipment are on display at the museum. The museum also includes artifacts from the four known Native American tribes who lived here seasonally to hunt and gather. The seismograph used to monitor geologic activity and the building housing it were built in 1926.

In addition to providing information about the geologic activity of Lassen Volcano, a brief description of geologic activity of other large volcanos within the Cascade Mountain Range is also shared (Mount Baker, Mount Rainier, Mount St. Helens, Mount Hood, Mount Mazama/Crater Lake, and Mount Shasta). We have already visited four of these volcanoes on our trip, and Lassen will be the fifth. 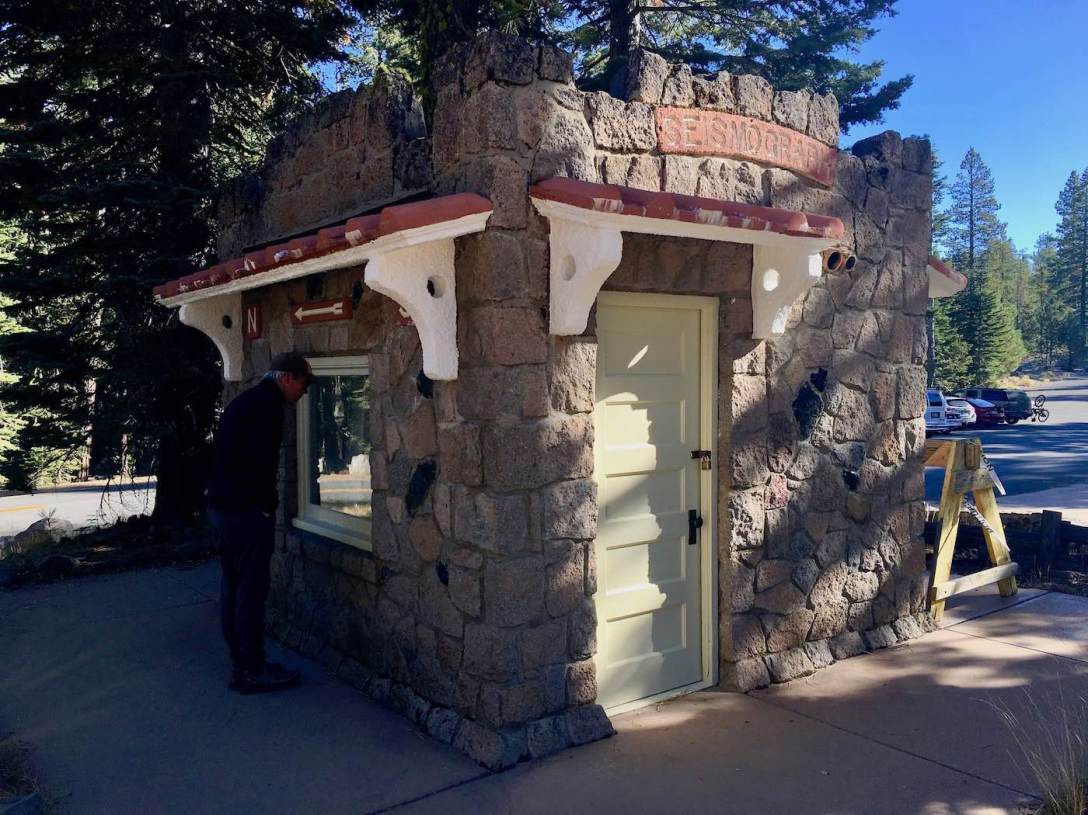 With a bit of Lassen education under our belt, we drive about nine miles southward on Hwy 89 for our first hike, an easy stroll on the half-mile paved (wheelchair accessible) interpretive loop trail through the Devastated Area. From the parking area we get a nice glimpse at the eastern side of Lassen Peak.

The Devastated Area was scrubbed clean during the May 1915 catastrophic eruptions, which caused massive mudflows (lahars) that swept through Lost Creek. The landscape has recovered quite a bit in the past 100 years, so now it’s really a path through young forest and does not look so much like a scarred landscape. The aerial photograph below of the Devastated Area in 1915 shows the true impact of the lahars.

The interpretive trail winds around “Old Giants” – lava rock boulders that were blasted from Lassen Volcano and carried three miles by the avalanche. These old giants are actually a young (geologically speaking) 27,000 years old. They were formed during Mount Lassen’s first eruption. 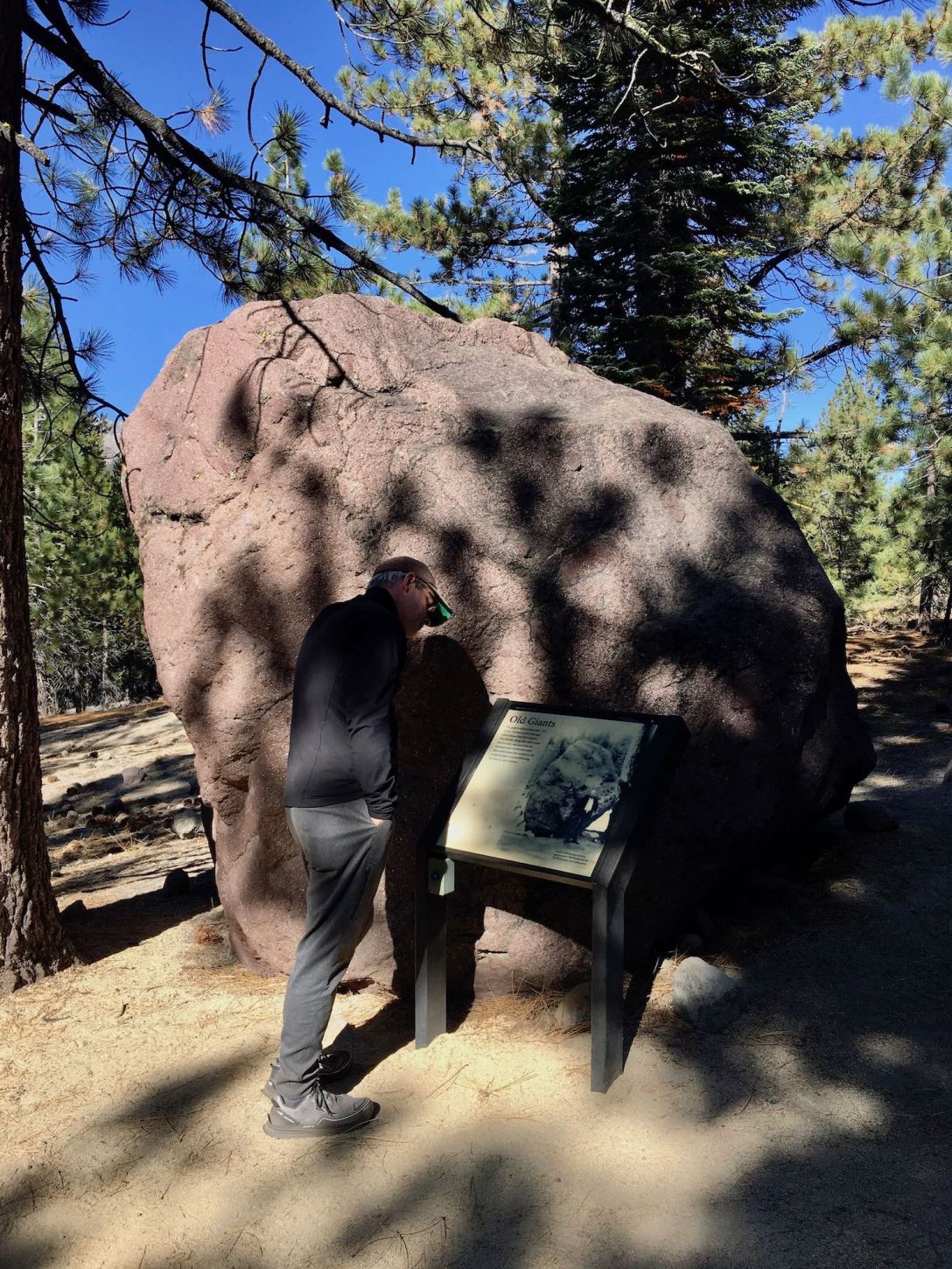 Continuing southward another 15 or so miles, we reach the glacial Lake Helen, elevation approximately 8,200 feet. These sparkling clear-sapphire-blue waters look inviting for a swim, though the water is icy! I imagine this could be refreshing after hiking nearby Lassen Peak on a hot summer day.

Just past Lake Helen we reach the Bumpass Hell trailhead parking lot, which is also one of many magnificent viewpoints within the park. The mountains in front of you are the remnants of the massive Brokeoff  Volcano, a Mt. Shasta-like volcano that last erupted an approximate 400,000 years ago. A giant volcanic boulder balances on the precipice. 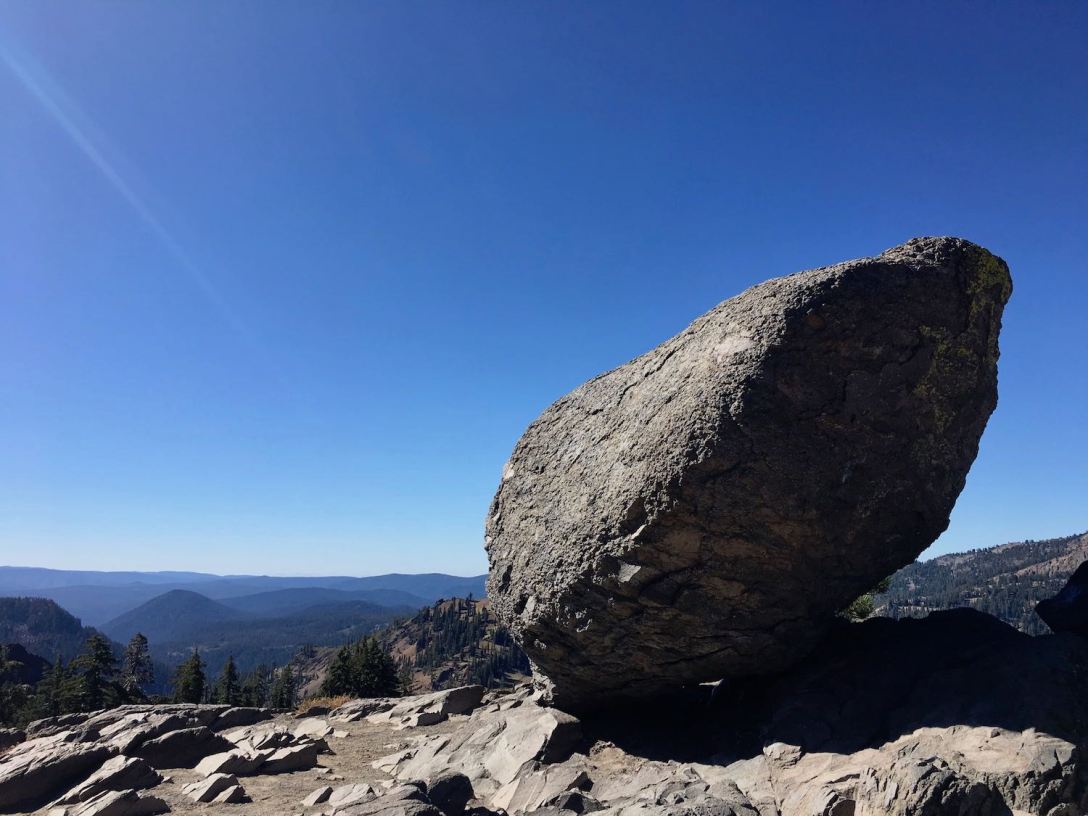 As we did not make it to Yellowstone this trip, we were really looking forward to seeing some geothermal activity at Lassen, making Bumpus Hell a can’t-miss hike. I am usually such a planner, however I had not looked at this park’s website for a couple of months before coming here, and we arrived to find the trail to Bumpass Hell closed for maintenance and boardwalk reconstruction. Note: As of July 2019 the Bumpass Hell trail is still inaccessible between the Brokeoff Mountain viewpoint and the western side of Bumpass Hell.

After taking in the view for a few minutes, we backtrack to the nearby Lassen Peak Parking Lot, where we briefly find a cell signal strong enough to research an alternate trail to Bumpass Hell.

To access Bumpass Hell from the east, we park at King’s Creek Picnic area, where we find the Cold Boiling Lake trailhead. This trail will connect to the eastern end of the Bumpass Hell trail, for a round-trip mileage of 5.4 miles and approximately 1,000 feet of elevation gain.

Much of the easy .8 mile trail to Cold Boiling Lake is through meadow and unremarkable young forest, the exception being a collection of stunted, snow-twisted small trees. Their unusual growth pattern makes me ponder the question: why are only the trees in this area twisty?

Cold Boiling Lake is not “boiling” when we reach it, and although as a geothermal area it is a bit underwhelming, the area makes for a pretty destination even if one should decide not to continue up the mountain as we do. We connect with the Bumpus Hell trail here, hiking counter-clockwise around the lake. As we ascend the mountain, the scenery becomes more and more beautiful with each footstep. 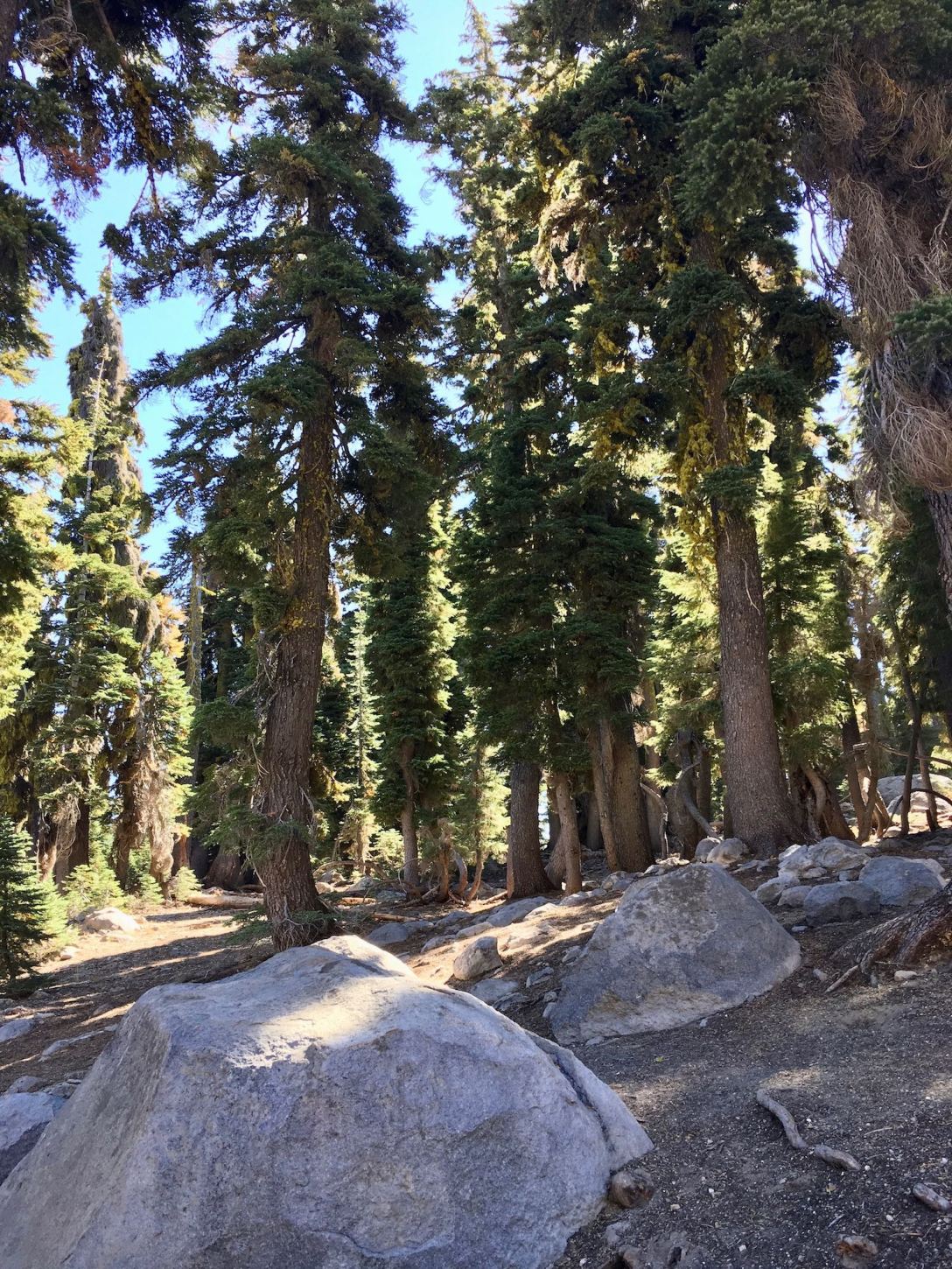 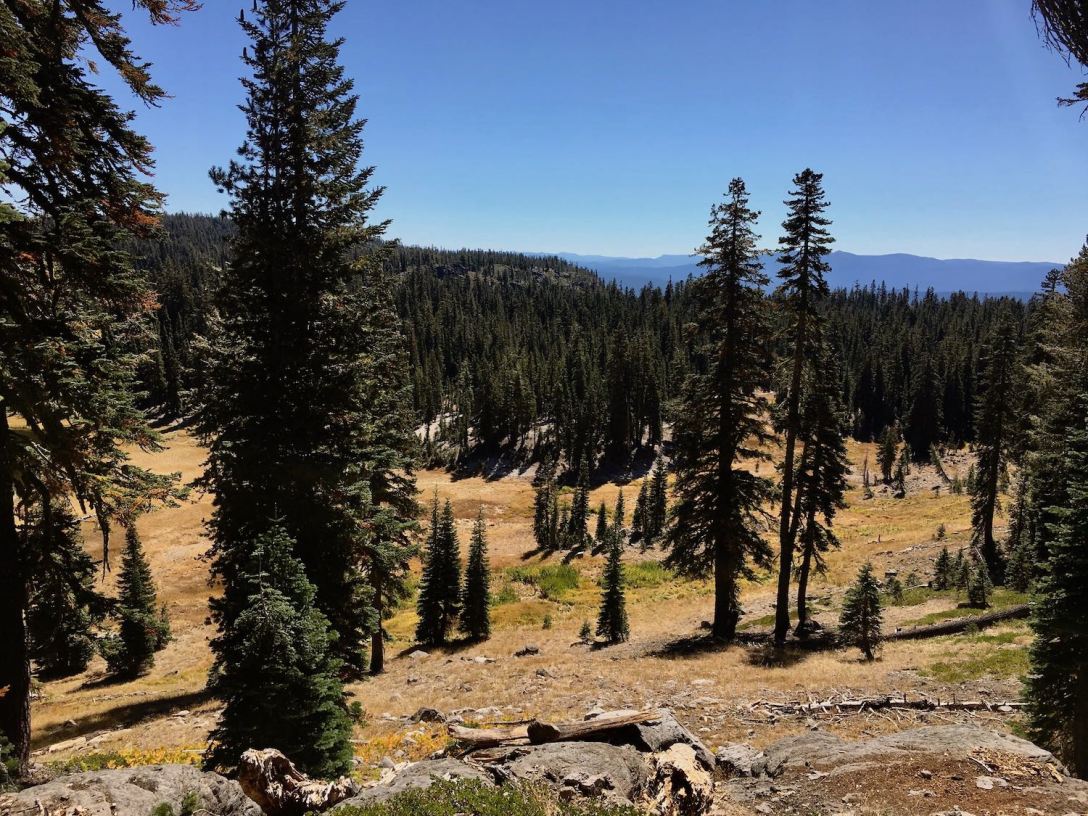 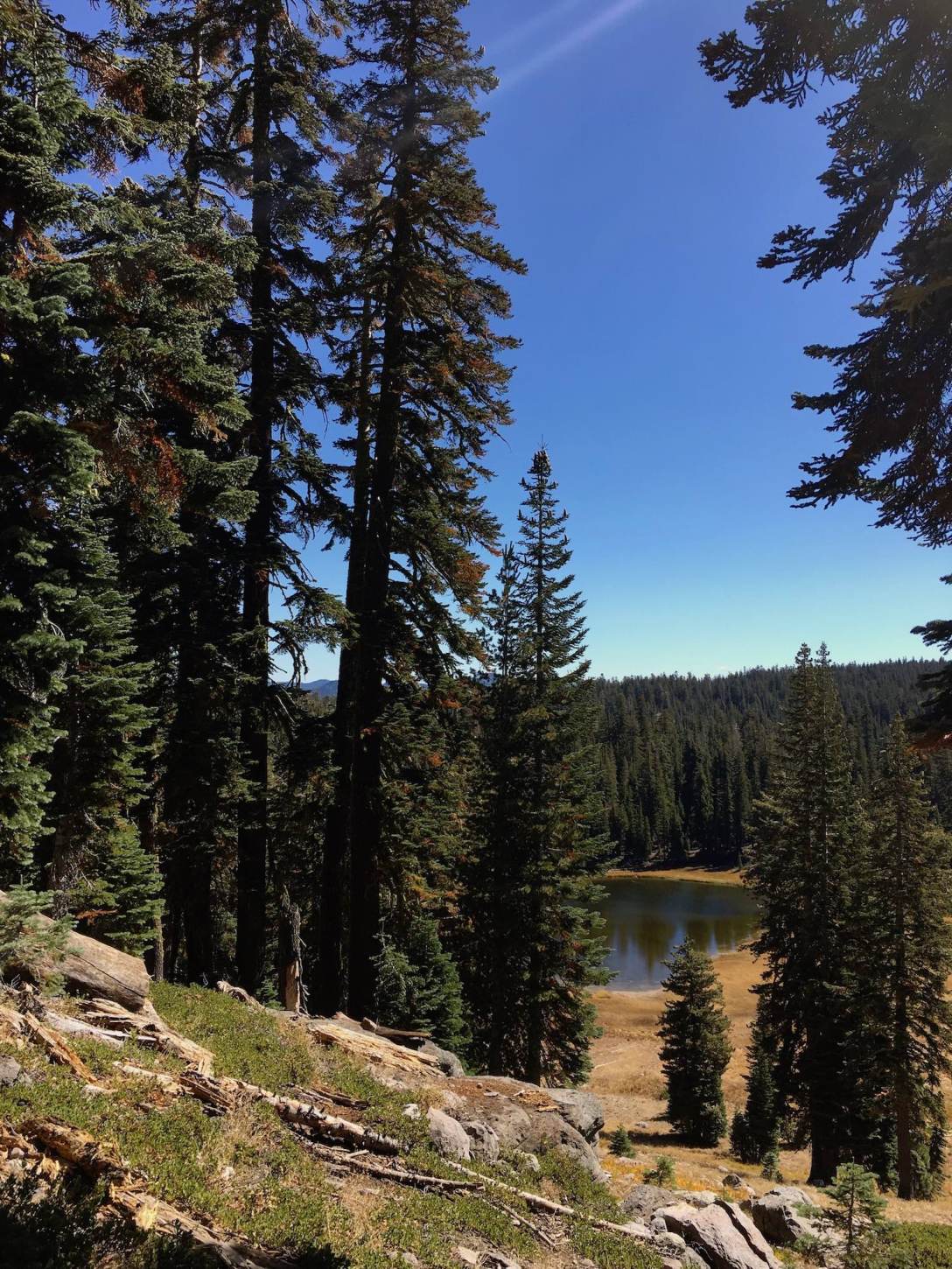 The higher one climbs, the better the views get. Vistas include many peaks and several alpine lakes, including Crumbaugh Lake. Manzanitas and a variety of magnificent tall evergreen trees grow along the trail, much of which is dappled shade. We walk through sunny mountainside meadows, and golden fern groves glow under the autumn sun. 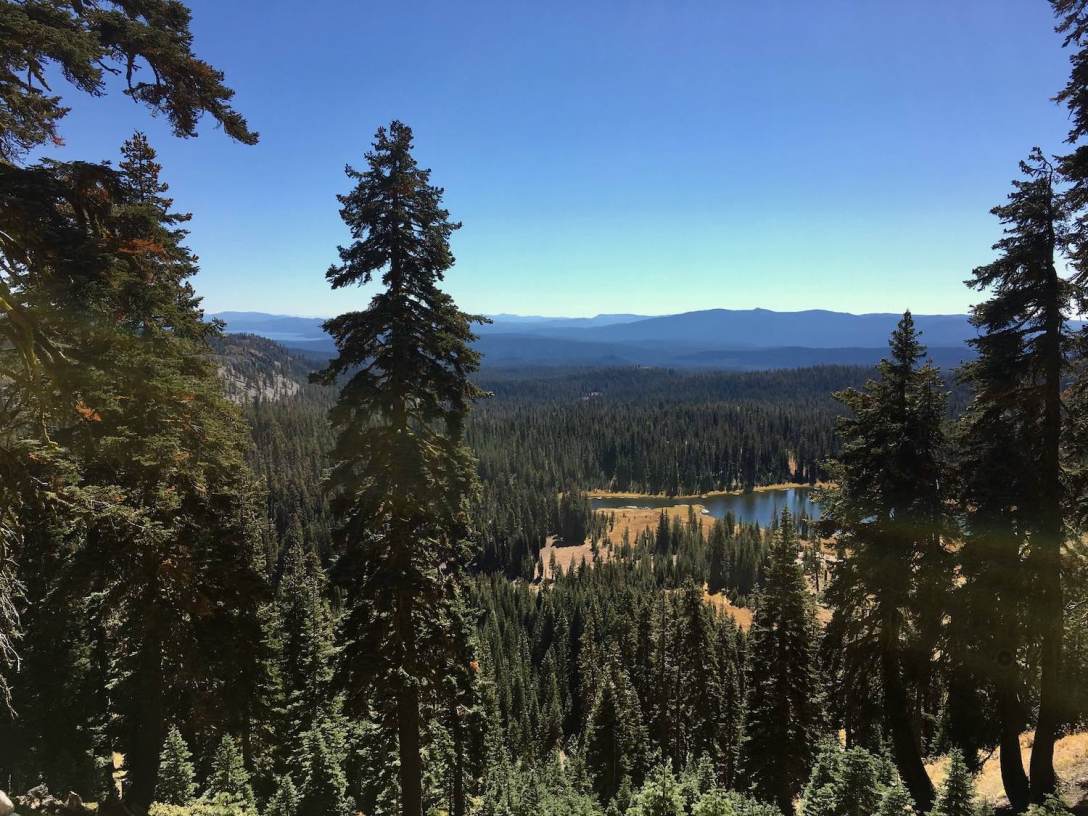 The sulfurous odor tells us that we must be close to reaching Bumpass Hell’s 16 acres of boiling springs and mud pots, hissing steam vents, and roaring fumaroles. Before we reach the geothermal hotspot, the forest opens up to present stunning views, and we spy Lake Shasta to our north.

Although the boardwalk through Bumpass Hell is currently being replaced, hikers are still able to get a good view of this area from a distance. Staring at the steaming pools  of water, boiling mud and mineral buildup for a few minutes, the eye can discern seemingly a thousand colors. The sounds of the steam escaping and mud bubbling are strangely melodic too.

Use caution and common sense here, as inevitably some visitors get a little too close and end up getting burned or otherwise injured, as poor Mr. Bumpass did.

On our return to King’s Creek Picnic area via the same trail, we walk through several kaleidoscopes of California Tortoiseshell butterflies, who are drawn to the muddy sections of trail where tiny springs seep down the mountainside. To our delight the thousands of butterflies flitter flutter all around us as we pass through the meadows. 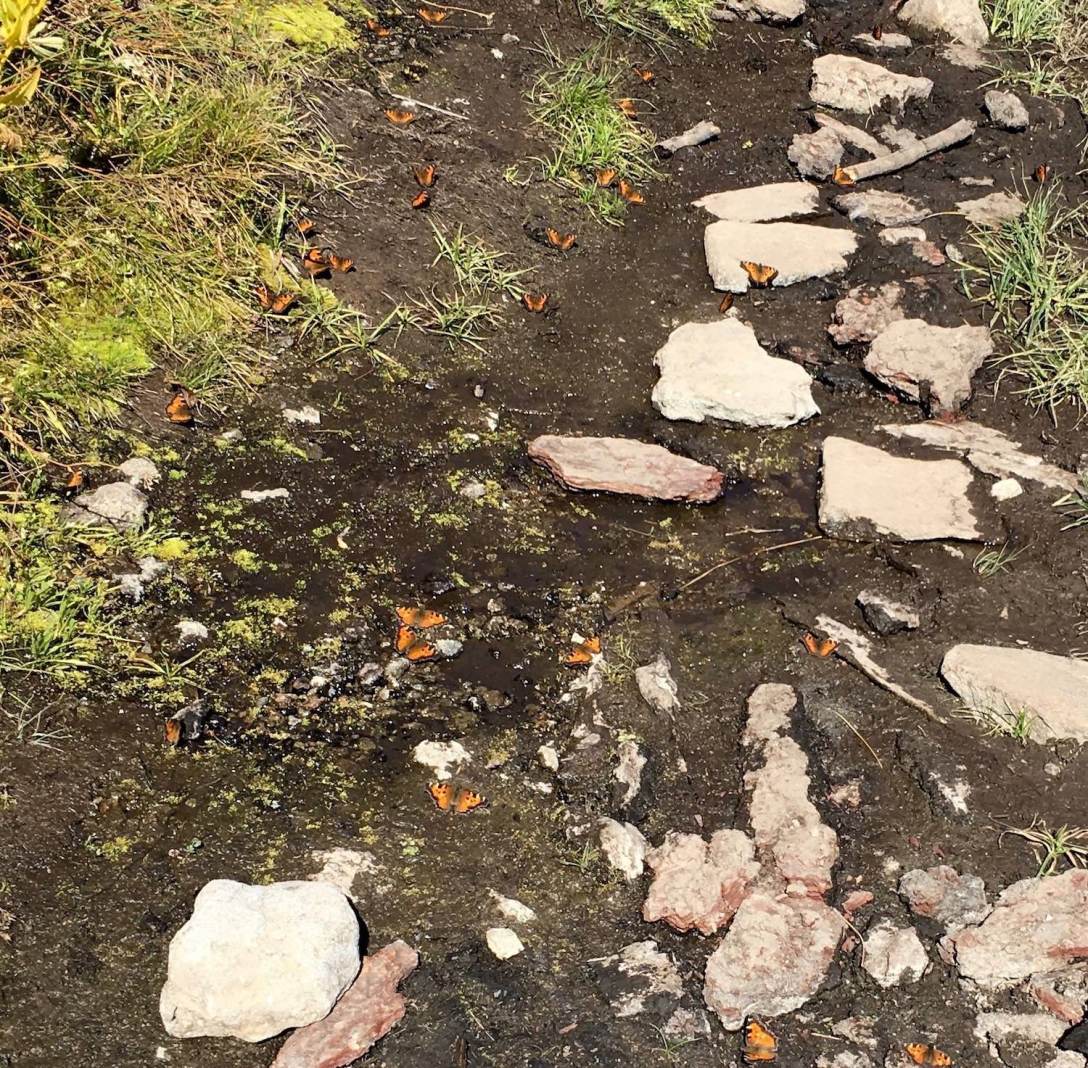 Halfway down the mountain I start thinking of my father, and by the time we arrive back at Cold Boiling Lake, I am inexplicably sobbing. To be alone with my thoughts, I fall a quarter mile behind Robert on the trail and the crying continues for the rest of my hike. Perhaps being back in my native state – the first time going “home” to California since my father’s passing – brought up unexpected emotions. Grief is a funny thing, and (for me anyway) seems to present itself at the strangest times. That said, my need for healing is in large part what prompted me to take this long road trip. One might think that this moment of heartache would lessen my love for this trail, but the truth is quite the opposite. This was one of my favorite hikes ever, and will undoubtedly be one of my most memorable.

After our hike, we drive a few miles to the southwestern park entrance and make a brief stop at the Kohm Yah-mah-nee Visitor Center. Still pulling myself together after my weepy spell, I actually forget to take pictures of the visitor center. To our surprise they serve local craft beer here, and the cute sign did inspire me to take a picture. A fresh draft beer was tempting, however the visitor center is a little crowded for our taste and with a long drive back to the other end of the park ahead, we skip it and make the scenic drive back to Manzanita Lake. 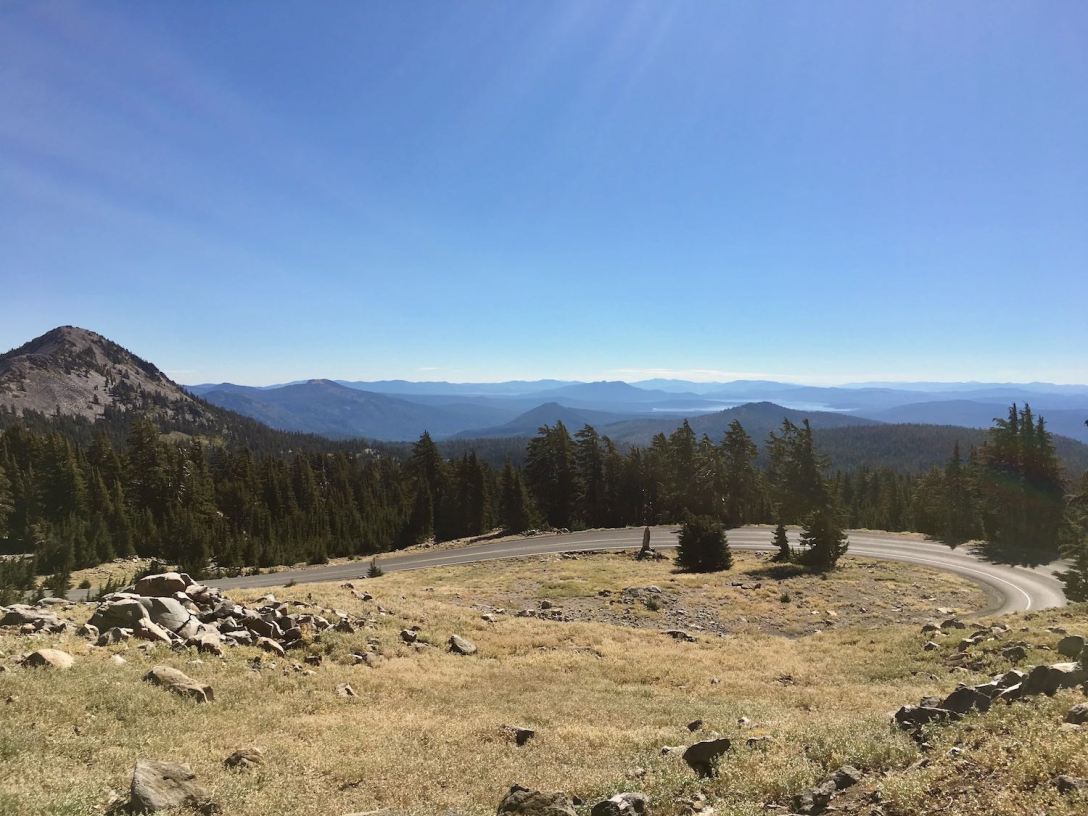 Back at camp, we cook dinner then walk half a mile from our campsite to Manzanita Lake, where we are enchanted by the golden hour light on the lake, and silently watch a black-tail doe and her fawn grazing nearby. We do not have enough time to hike the circumference of the lake before sunset (the loop trail provides stunning views of Mount Lassen), however walking the road back to our campsite, a brilliant orange Lassen Peak radiates through the green-black forest. 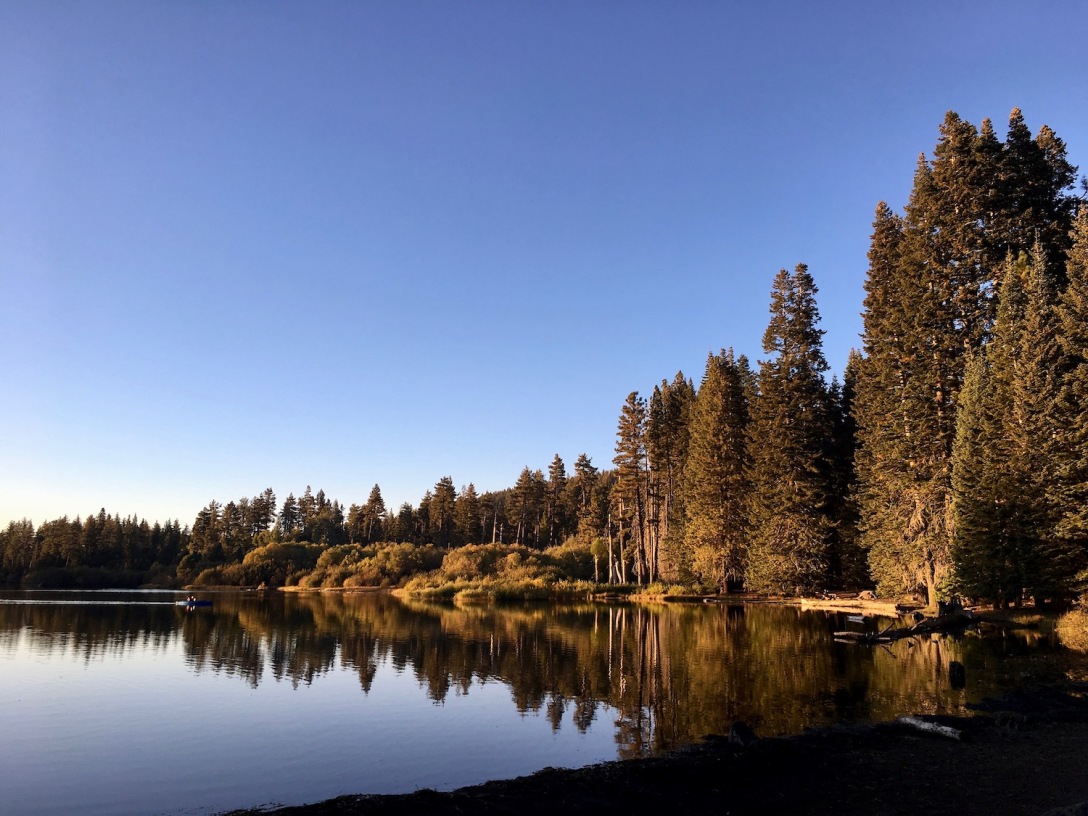 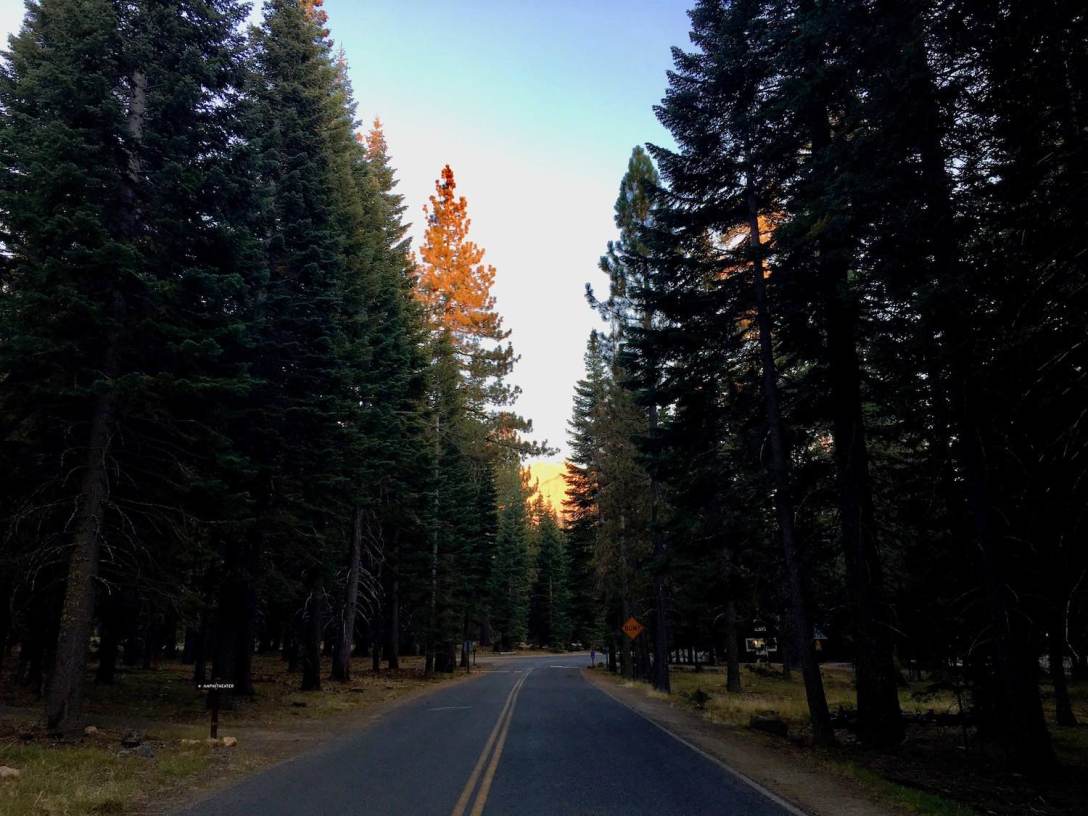 The air is cold tonight, and we retreat to the tent pretty early. In spite of my emotional breakthrough, our first day in Lassen was awesome. I cannot wait for day two, and for our Lassen Peak hike!