Home to dozens of wineries, one of the best craft breweries in the country, a very special state park, and the spoken-nowhere-else (and rarely here anymore) Boontling language. 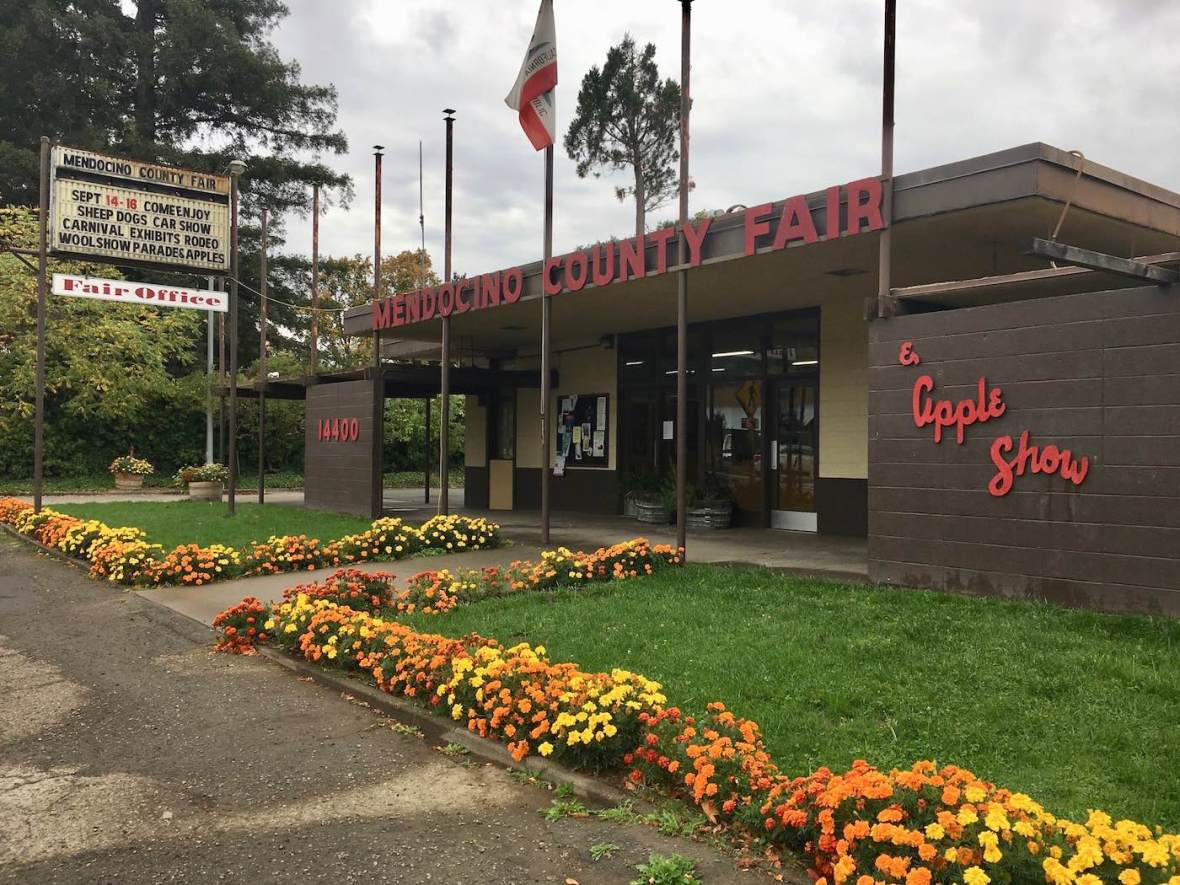 After settling into our cabin at Hendy Woods State Park, we make the 15-minute drive southeast through lovely Anderson Valley to the tiny town of Boonville, home of Anderson Valley Brewing.

We first heard of Anderson Valley Brewing (AVB) when we happened upon their Goses (asking ourselves “what’s a gose?”) stocked at an excellent if oddly located small-town beer store near our house.  It became our weekly routine to make the 10-minute drive for a hike or trail run at the Chickamagua Battlefield, then on the way home pick up a refreshing 6-pack of Holy Gose, Blood Orange Gose, or Briney Melon Gose. AVB’s goses were the first sour beers we ever tried, and are still our favorites.

As you can tell from the pictures below, the AVB tap room is quite family and dog friendly, and  during our visit is filled with locals as well as a few fellow tourists. 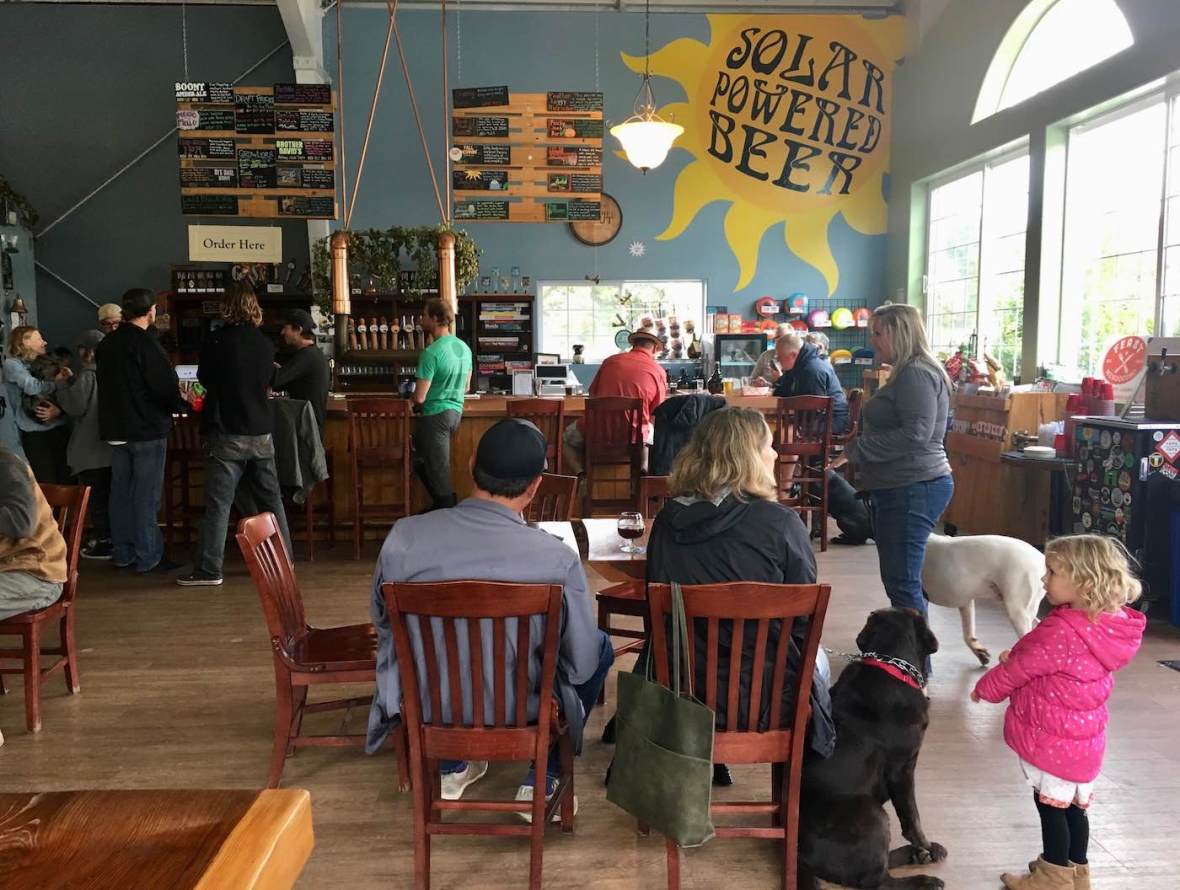 My favorite goses are not currently on tap, instead the tasting room’s 20 taps offer mostly limited release and seasonal beers. Although the tap room does not serve food, on this Saturday afternoon a BBQ food truck is parked on their lot, so we scarf a delicious pulled pork sandwich. And that compliment comes from a couple of Tennessee bbq snobs.

Out in the beer garden, a local doggo tries to partake in this group’s flyer tasting, while (outside of frame) human visitors chase little kids around and play corn hole. 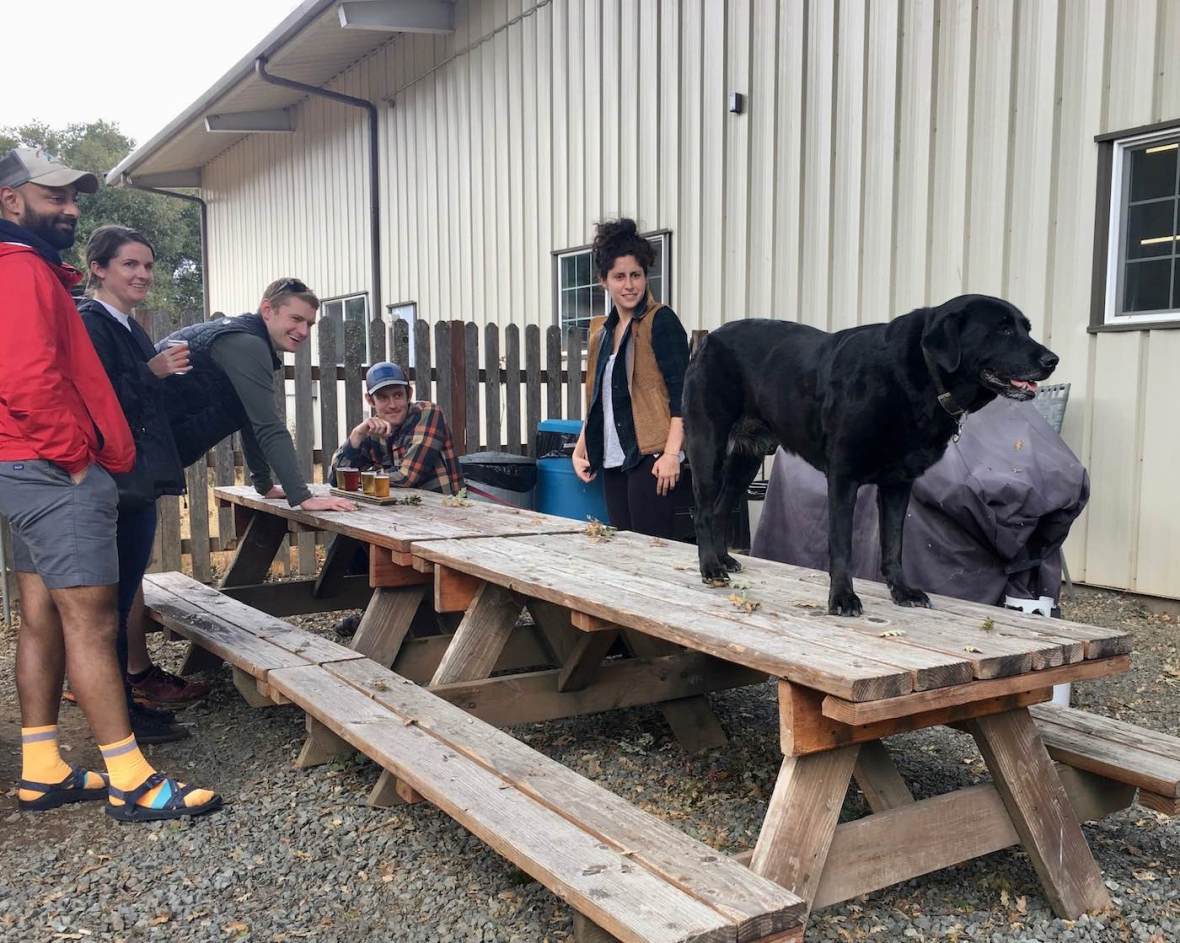 Boonville is pretty tiny, but the beauty of the valley makes it tempting to take a look at the real estate listings, posted in the window of a charming real estate office.

A Language of its Own: Boontling

Of particular interest to us is Anderson Valley’s regional jargon of Boontling (Boonville + lingo), the exact origin of which is debated. According to the Anderson Valley Historical Society’s museum, Boontling was created in the late 19th century by schoolboys so that their elders could not understand what they were saying. Approximately 1500 Boontling terms were created.

Boontling spread through Anderson Valley like wildfire though its use began to decline around the time of World War I.  We were really hoping to hear people actually speaking Bootling; its near-complete demise in daily use is a revelation to us upon our arrival in the valley. We will have to settle for reading about it. It seems that Anderson Valley Brewing’s use of it has helped to spark national interest in Boontling, so I do hope that locals are able revive the colorful dialect. 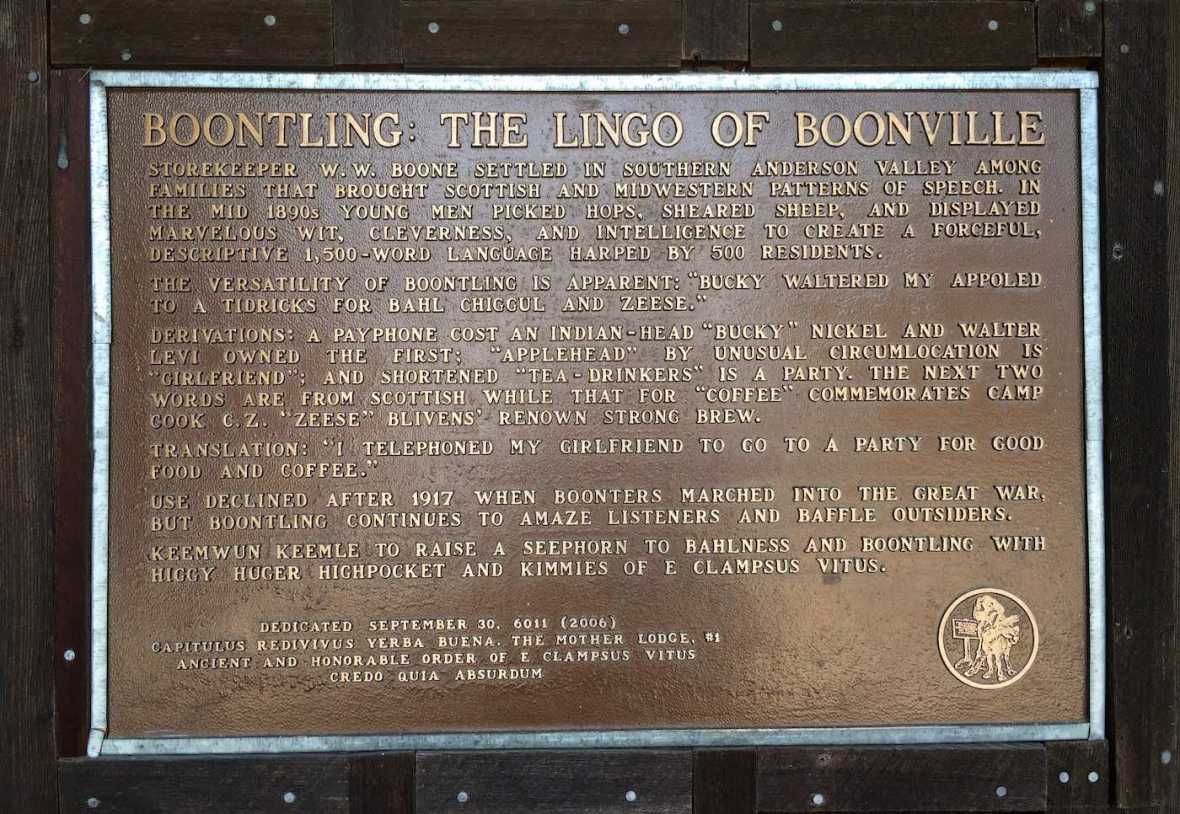 A few of my personal favorite Boontling words and phrases are: 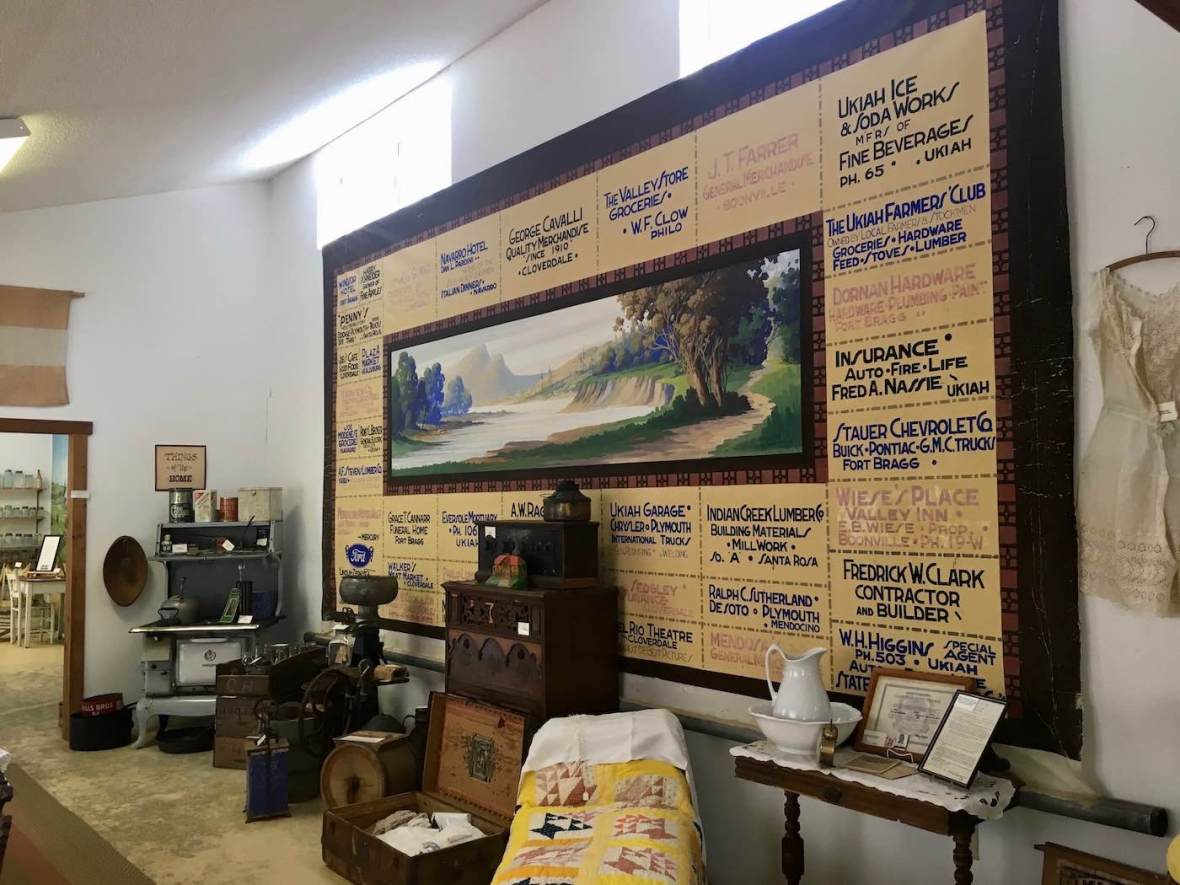 We are typically beer drinkers rather than wine drinkers, however a visit to Anderson Valley may just inspire me to reverse that order. Although we do not visit any of the valley’s wineries during our brief 48 hrs in Mendocino County, we will definitely be back one day to do so. Autumn is a splendid time to visit the valley. Ah the golden grasses, trees, and grape vines…

The tasting room at Greenwood Ridge Vineyards, pictured below, is an example of  the region’s “deep-end“(see Boontling translation above) architecture, and was built from a single fallen redwood trunk. 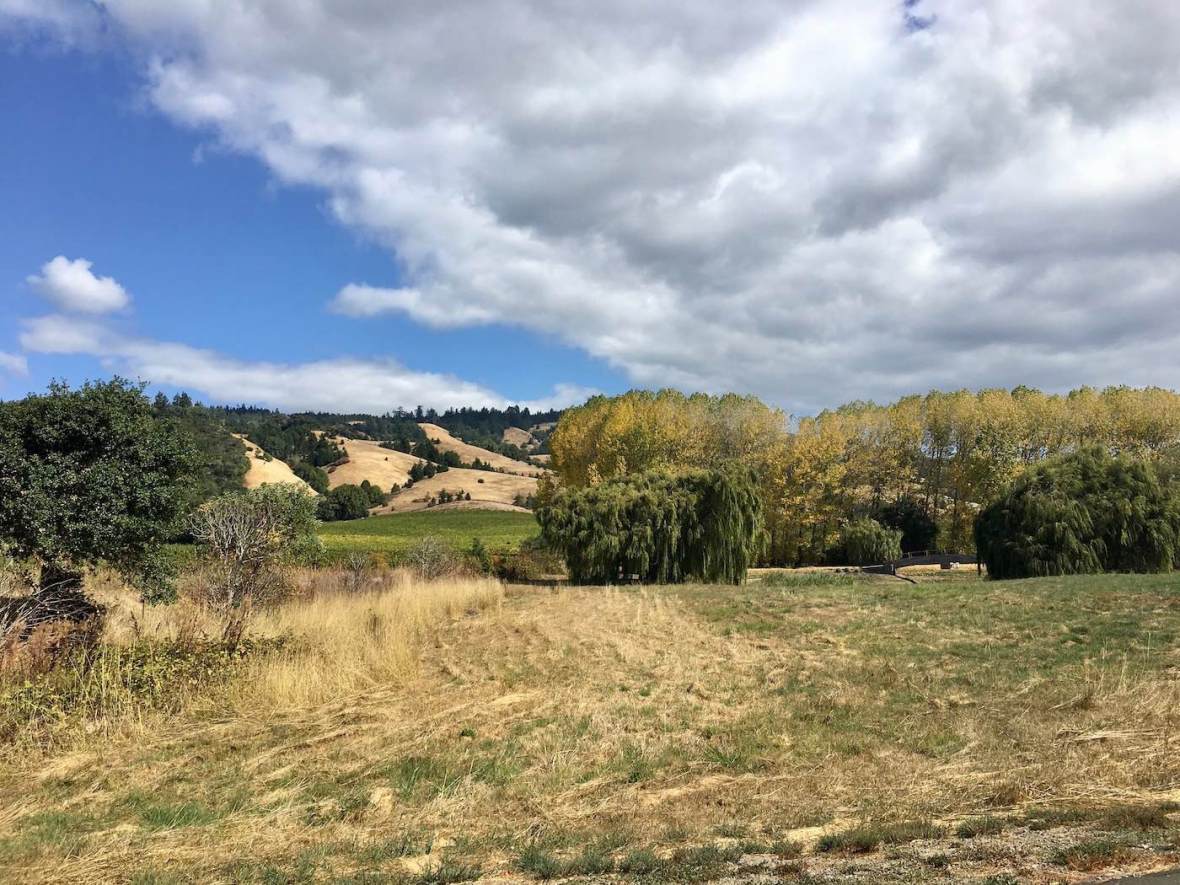 Two days in Mendocino County are not nearly enough for me. Arguably one of the prettiest places in the U.S., a visit to this heavenly county on the California coast just may have you longing to give up city life and live out your days in the country. If I ever become weary of wandering, you may just find this brightlighter putting down roots here.

Next up: the dreamy village of Mendocino!