On May 18, 1980, Mount St. Helens – a volcano in the Cascade mountain range of southwestern Washington – erupted with a force exceeding 27,000 bombs. Geologists knew the blast was coming. There was plenty of warning. And yet 57 human souls were lost, plus countless wildlife.

The event was burned into our brains at a young age. For many of us living in the Eastern U.S., volcanoes seem so foreign. And yet, dormant and active volcanos are scattered all across the western U.S. In fact, scientists currently name 169 active volcanos in the United States (many are in Alaska).

Robert being two years my senior, his memories of the weeks leading up to Mount St. Helens’ eruption are a little clearer than those of mine as a seven year-old.  We both recall tuning in to the news each evening, and a lot of talk at school. The excitement/dread/anticipation of the predicted eruption consumed our kid minds. 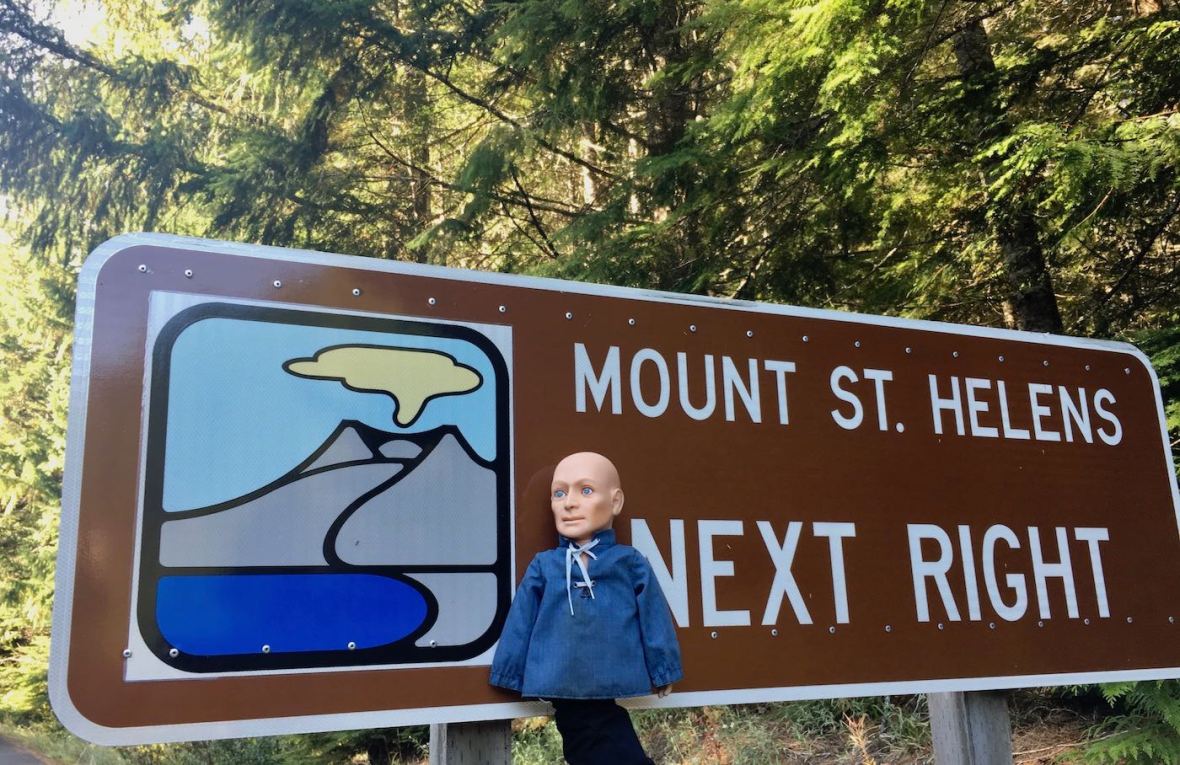 When we planned our big road trip, Mount St. Helens was a non-negotiable destination on our itinerary. Traveling from Mount Rainier, and planning to drive southward to Bend and later Crater Lake, we chose to drive the crazy, bumpy, twisty roads through Gifford Pinchot National Forest to the lesser visited East side of Mount St. Helens National Volcanic Monument.

While this course does not take us anywhere near the visitor center or Johnston Ridge Observatory (located on the Western side of the park), the educational plaques at the numerous viewpoints provide extremely detailed information about the volcano’s geological history and activity (not just the 1980 eruption), the path of destruction and the area’s recovery, the area’s original residents, and the stories of those who were tragically lost to the 1980 eruption.

We have the Eastern side of the park almost to ourselves today, encountering fewer than 20 other visitors while we are there.

On the 17-mile twisty road up to Windy Ridge, we pull off at almost every viewpoint to take in the views and an education.

We had read that the Eastern side of the park provides the best views of Spirit Lake, and into the low side of the caldera’s rim.

From Wikipedia: “Spirit Lake received the full impact of the lateral blast from the volcano. The blast and the debris avalanche associated with this eruption temporarily displaced much of the lake from its bed and forced lake waters as a wave as much as 850 ft (260 m) above lake level on the mountain slopes along the north shoreline of the lake. The debris avalanche deposited about 430,000,000 cubic metres of pyrolized trees, other plant material, volcanic ash, and volcanic debris of various origins into Spirit Lake. The deposition of this volcanic material decreased the lake volume by approximately 56,000,000 cubic metres. Lahar and pyroclastic flow deposits from the eruption blocked its natural pre-eruption outlet to the North Fork Toutle River valley at its outlet, raising the surface elevation of the lake by between 197 ft (60 m) and 206 ft (63 m). The surface area of the lake was increased from 1,300 acres to about 2,200 acres and its maximum depth decreased from 190 ft (58 m) to 110 ft (34 m). The eruption tore thousands of trees from the surrounding hillsides and swept them into Spirit Lake. These thousands of shattered trees formed a floating log raft on the lake surface that covered about 40% of the lake’s surface after the eruption.”

We climb the 450+ stairs up Windy Ridge. From Windy Ridge we have 360 degree views. 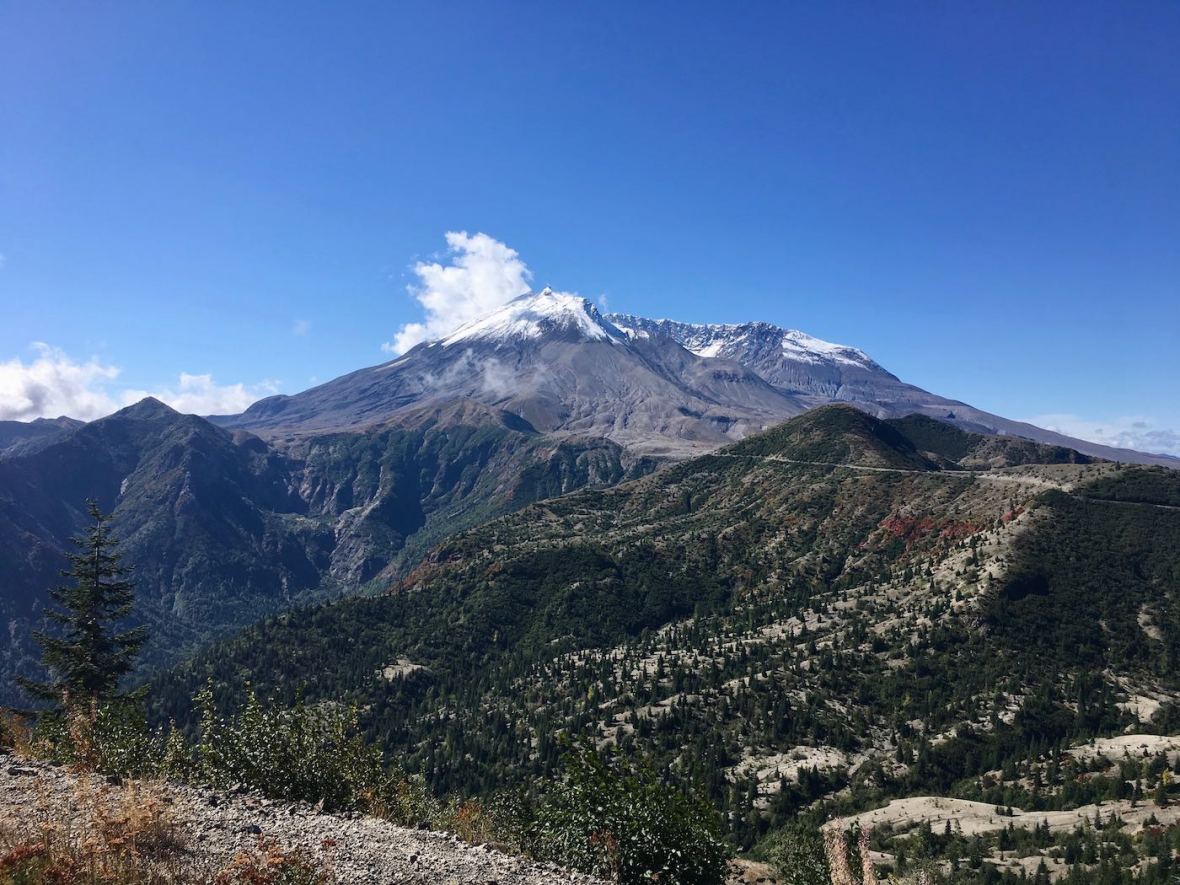 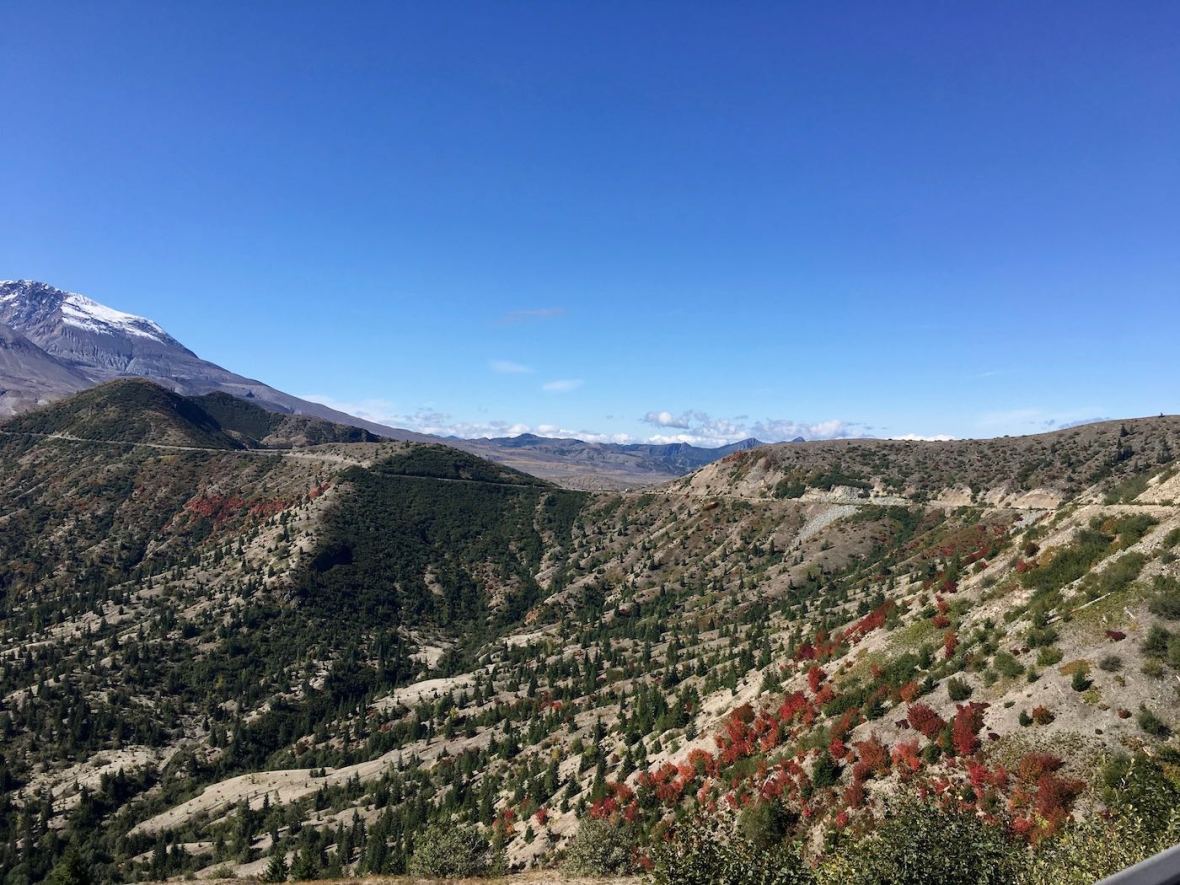 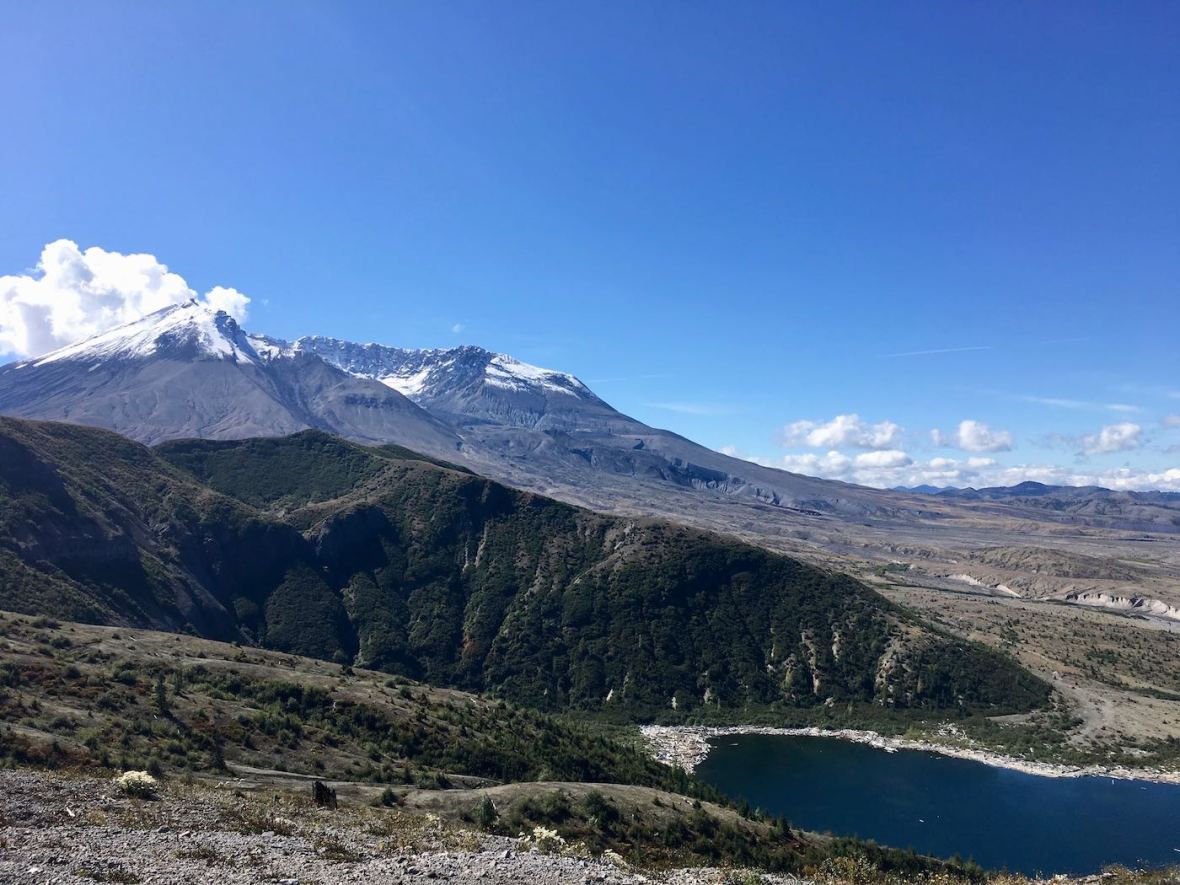 See how many logs still cover the surface of Spirit Lake? That “raft” of logs is constantly moving around the lake, which one can see in this series of satellite images from each year since the 1980 eruption. 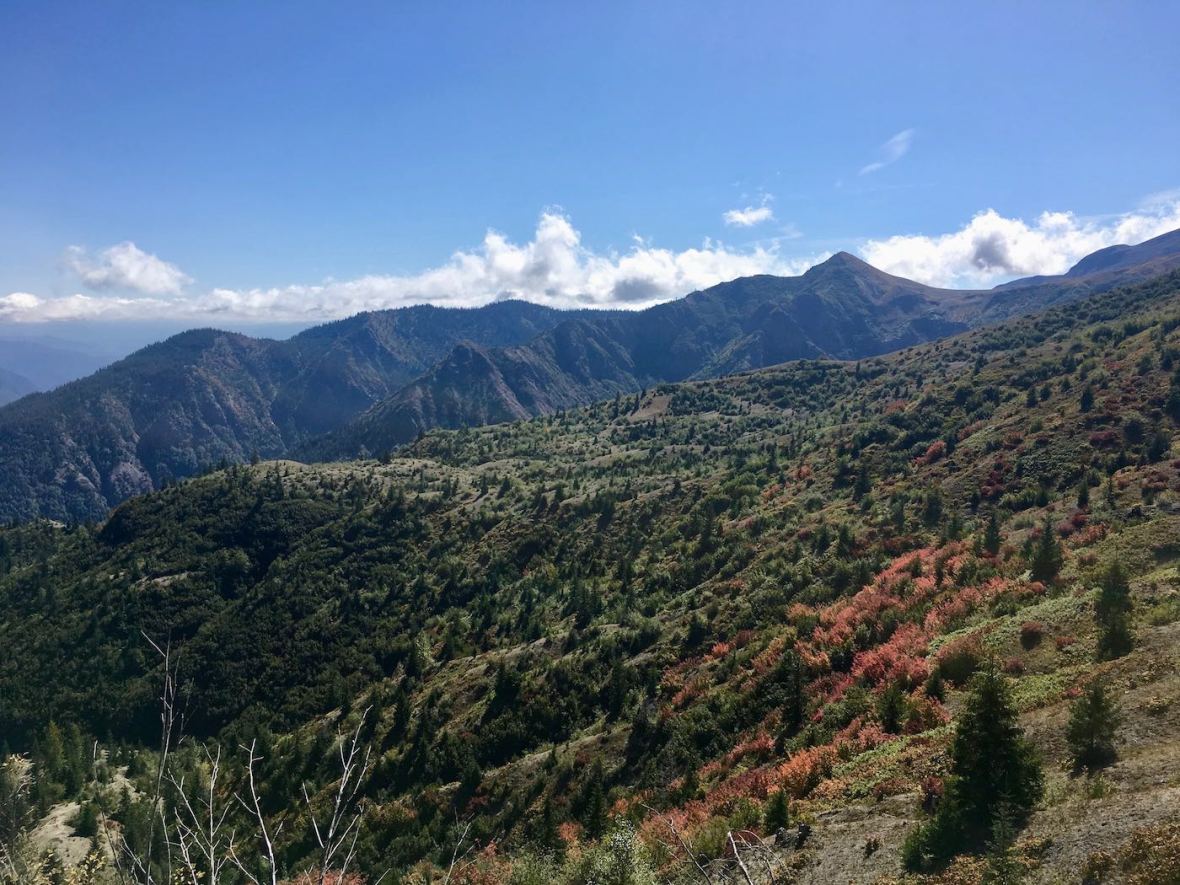 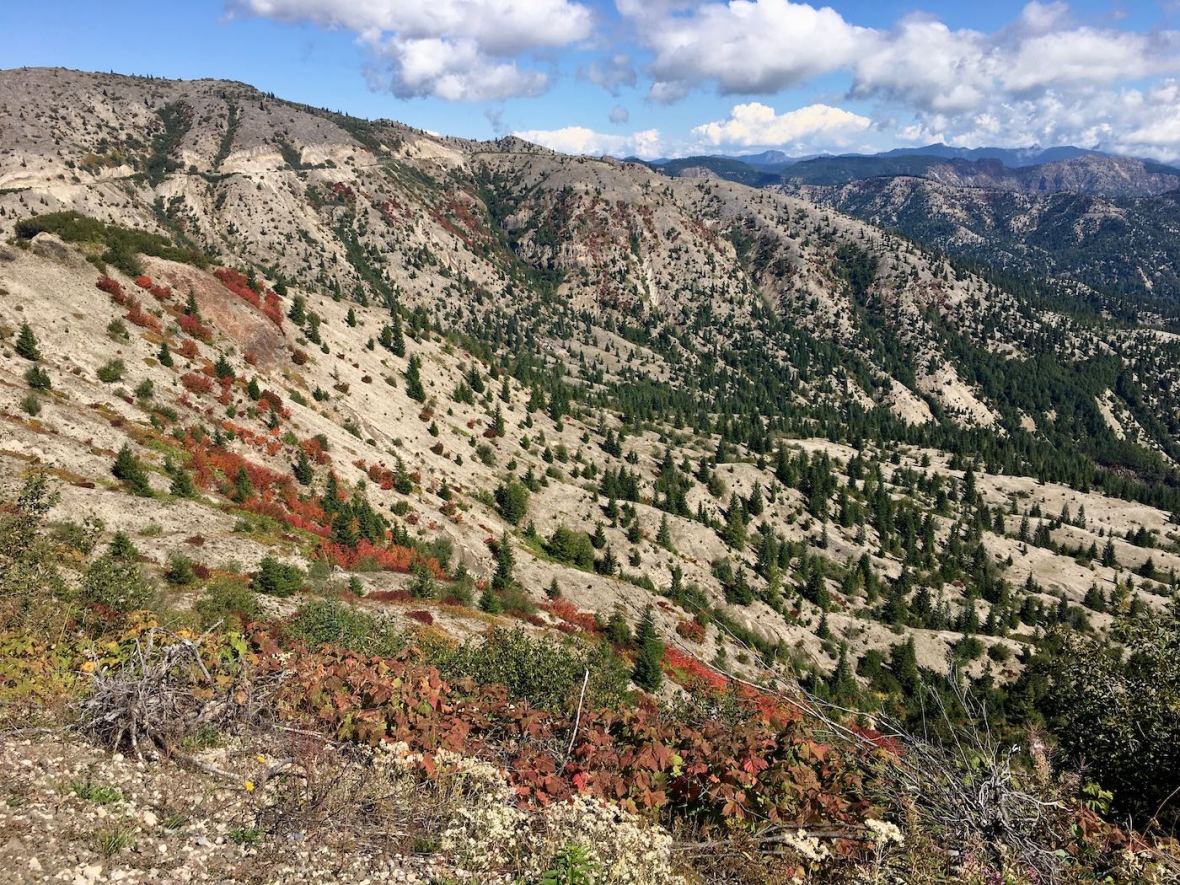 We leave the Windy Ridge Interpretive Site and set off on Trail #207 (aka Windy Trail aka Truman Trail). Trail #207 follows a mountainside service road which was built by the U.S. Army Corps of Engineers in 1982 to access the Spirit Lake pumping station.

Within the blast zone one can see lava flows into the valleys, loose volcanic rock and pumice-covered mountainsides where huge trees were ripped off just feet above the roots. These mountains were absolutely scoured by the hot stone-filled blast winds. 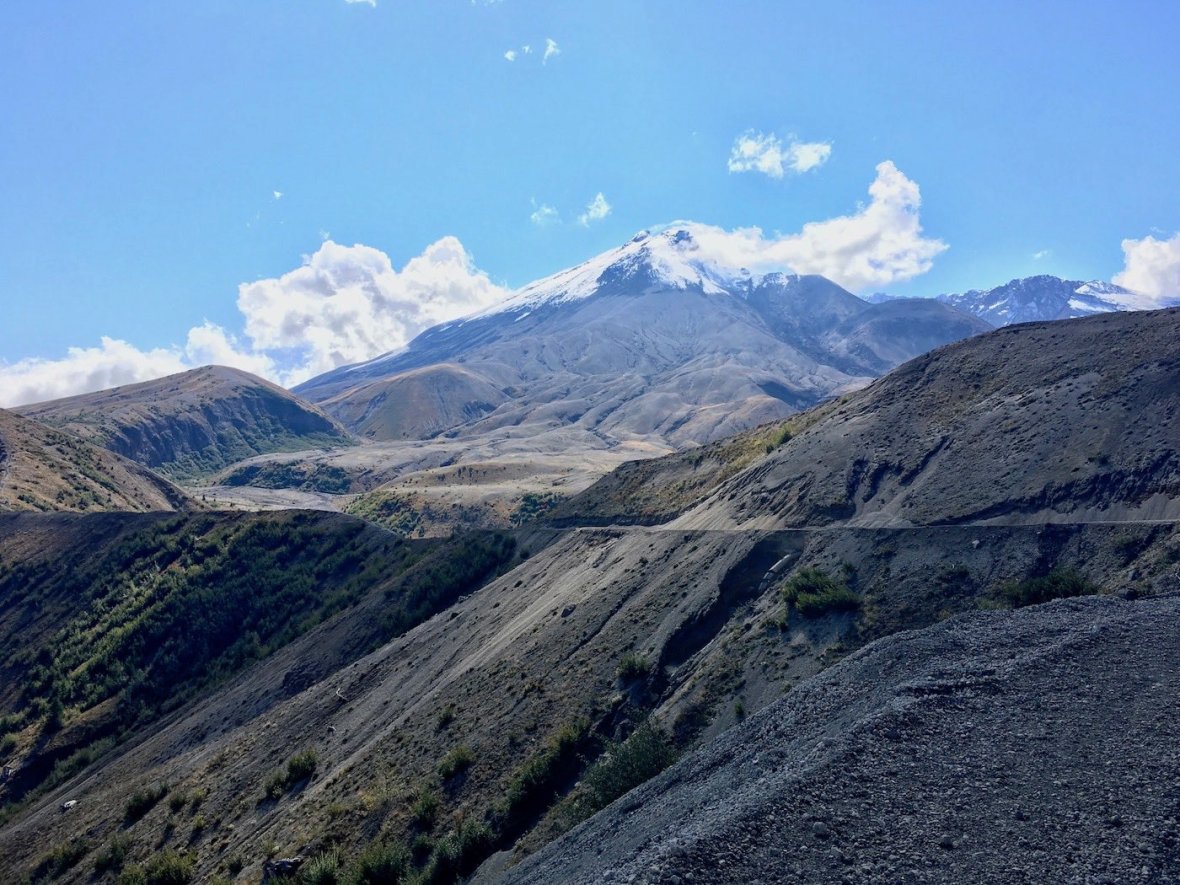 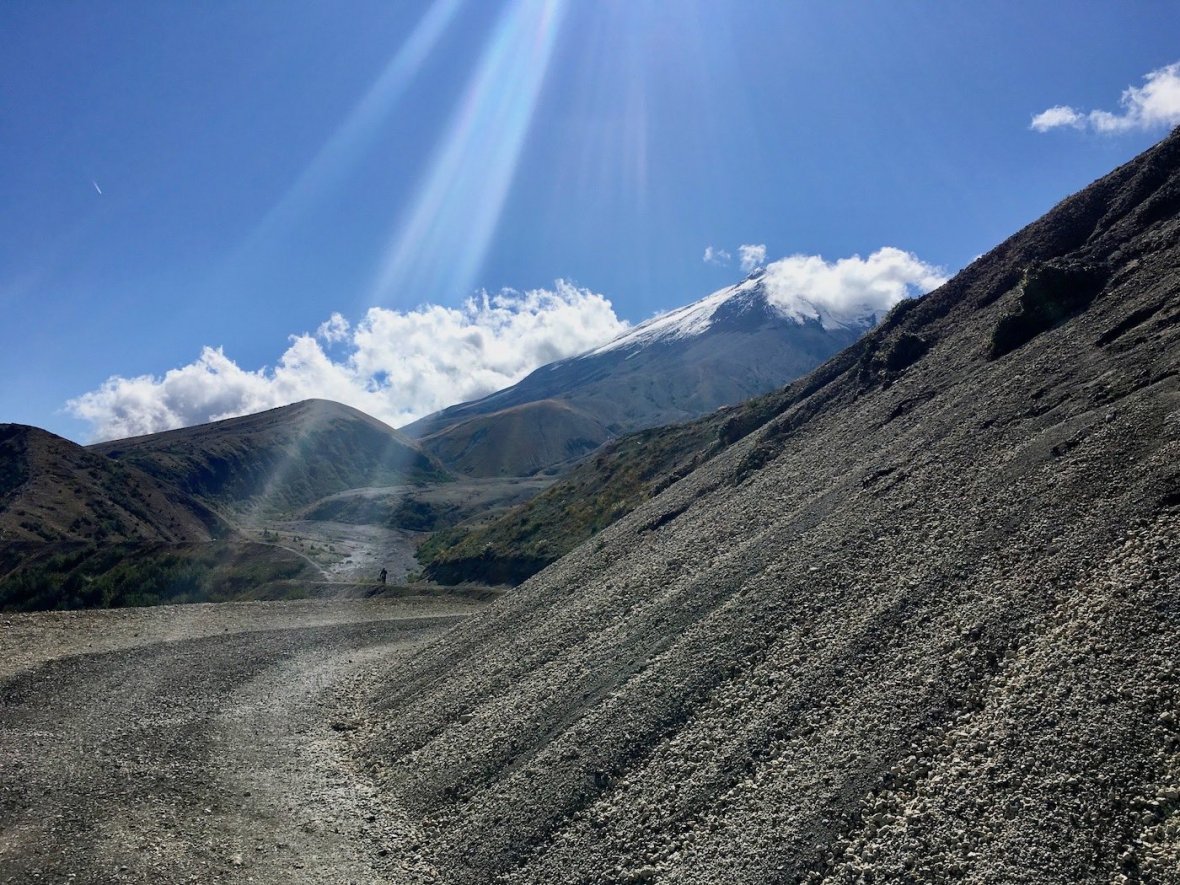 Careful, conscientious forest conservation and restoration efforts are evident on the mountainsides within the blast zone. Plantings have managed erosion. Some tree skeletons were removed, however others were left as habitat to encourage wildlife to return.

Every direction one turns there is something different to see. In some areas, the heavy snowpack protected small trees from the blast and there are swaths of lush, green forest. 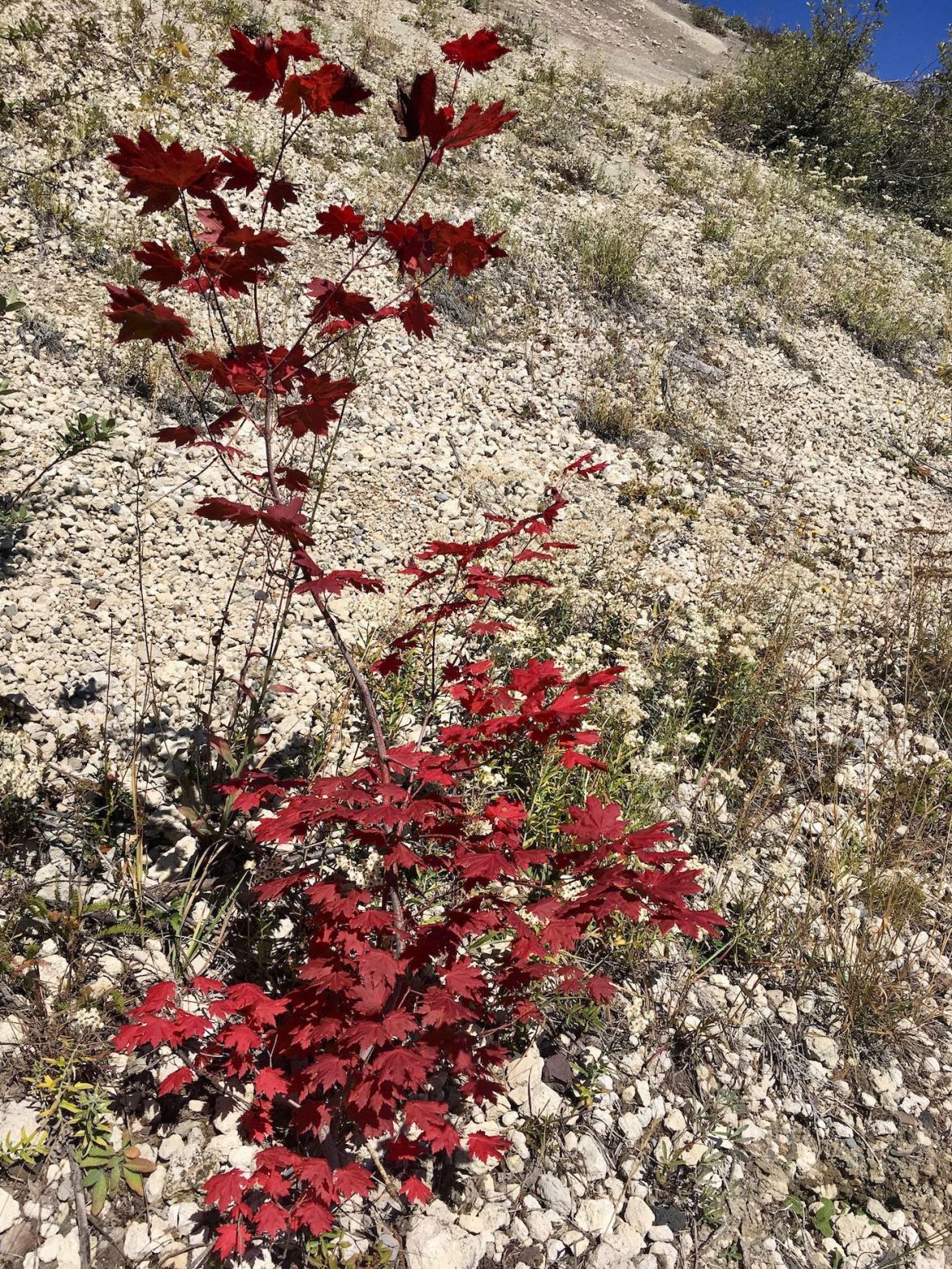 A variety of wildflowers, while not yet found en masse on the Eastern side of the park – have sprouted along the mountainsides and on the pumice plain below. I was even treated to a ladybug sighting! 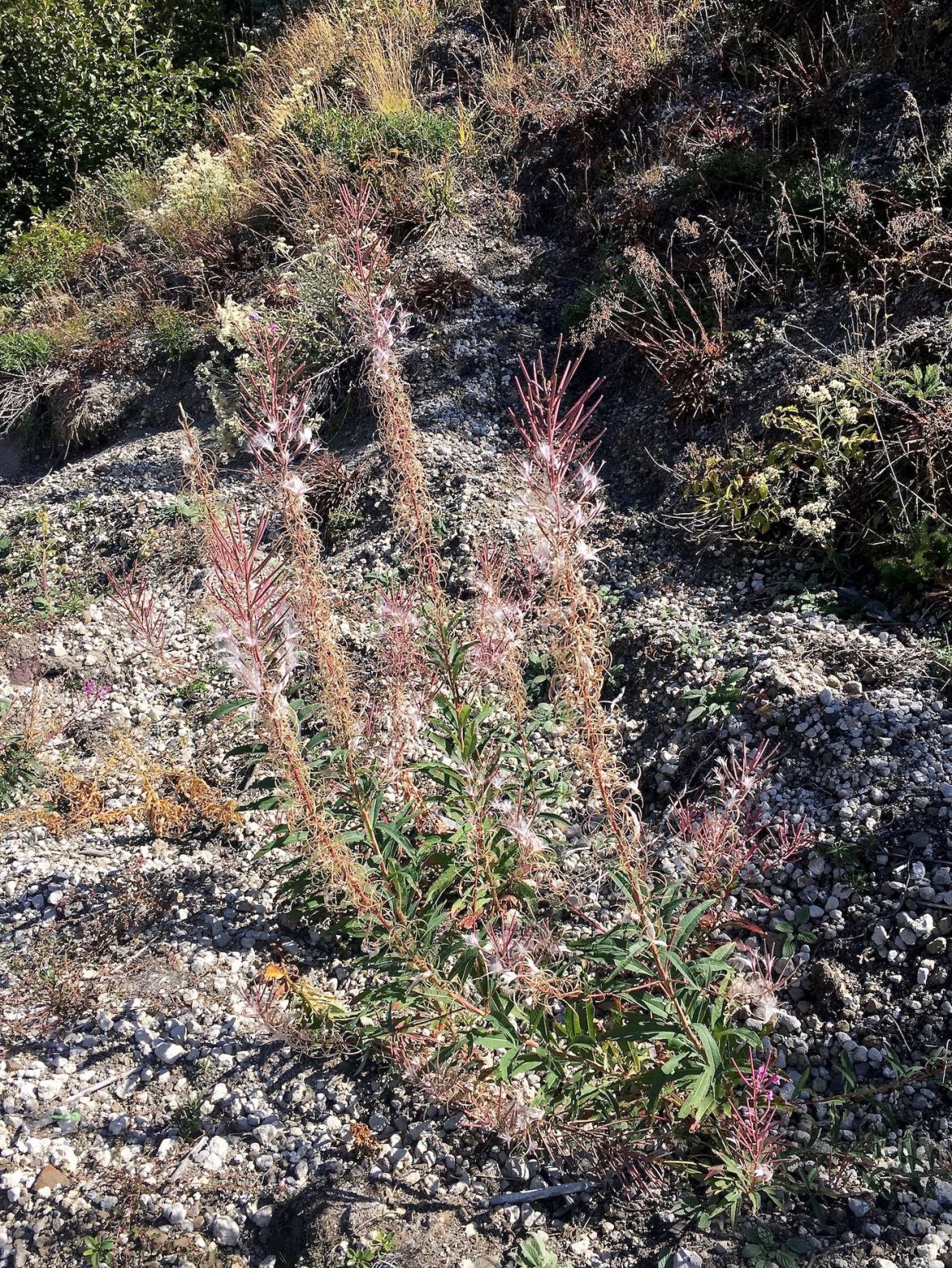 Creeks originating from Mount St. Helens have created washes through the pumice field. 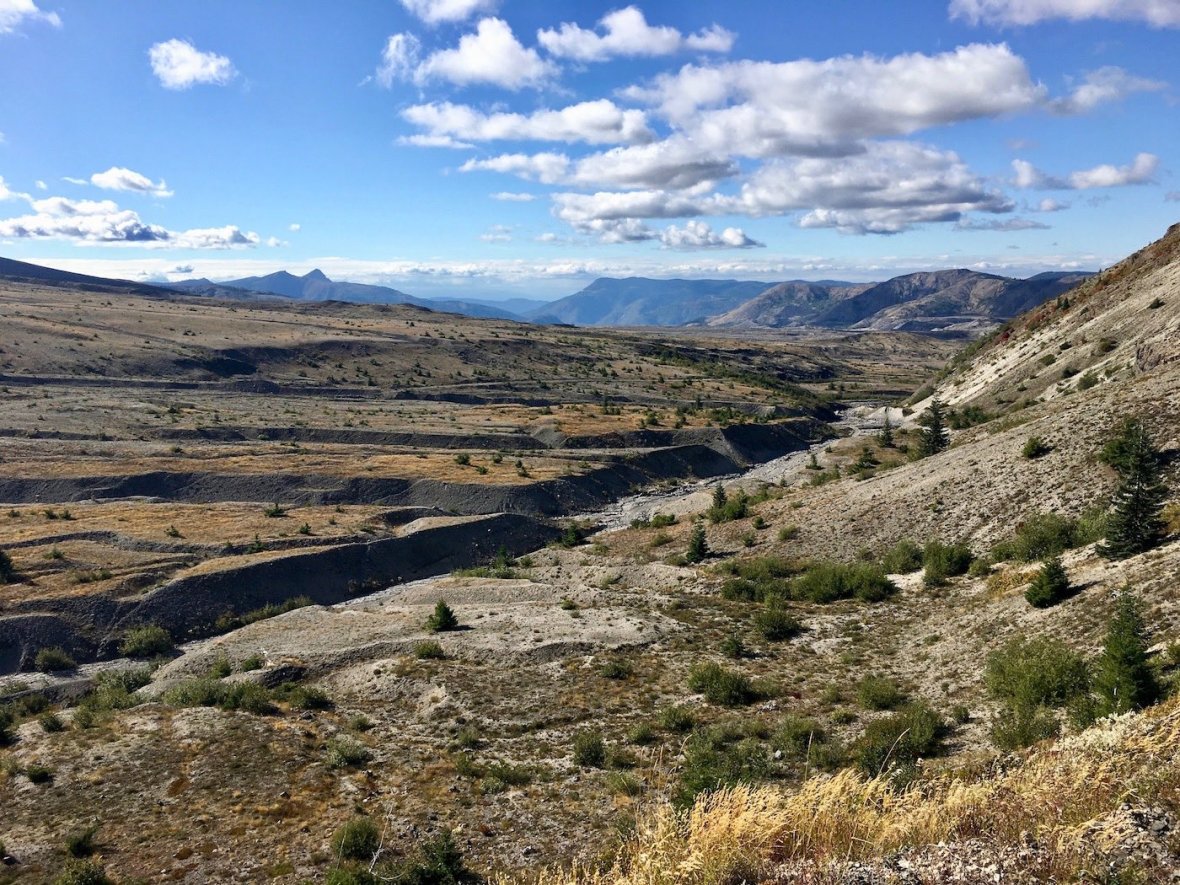 As we descend a bit in elevation, nearing the foot of Mt. St. Helens, the trail forks. The left fork is the multi-use #216D trail (aka Plains of Abraham trail) which runs along a narrow ridge top and takes one close to Mount St. Helens’ Eastern slope. Although it isn’t too intimidating looking in my picture, to the eye it looks  terrifying for mountain biking.

We do not have a trail map with us in order to know where #216D leads, so we instead choose the right fork trail and continue on #207, which parallels the East-side base of Mount St. Helens through the blast zone, crossing several large washes and small streams as we traverse the pumice plain and debris avalanche. 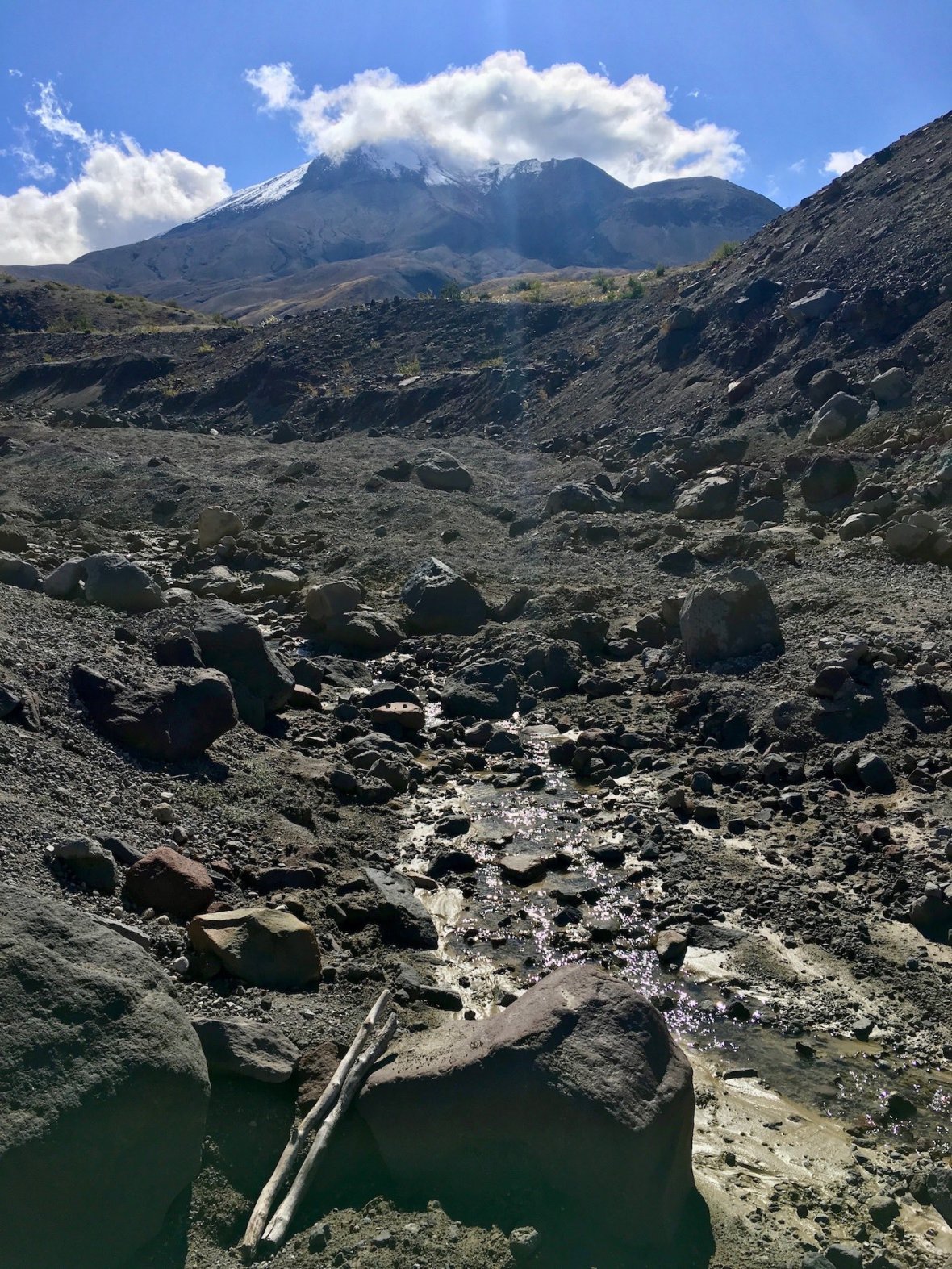 Even in the pumice field,  Lupine, Indian paintbrush, and many other types of wildflowers have sprouted. 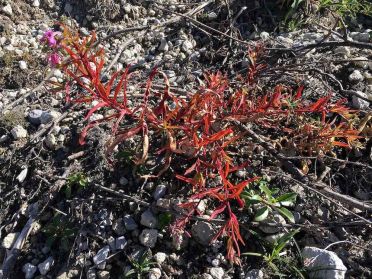 Continuing down Trail #207 (we didn’t) would take the hiker pretty close to the lake. 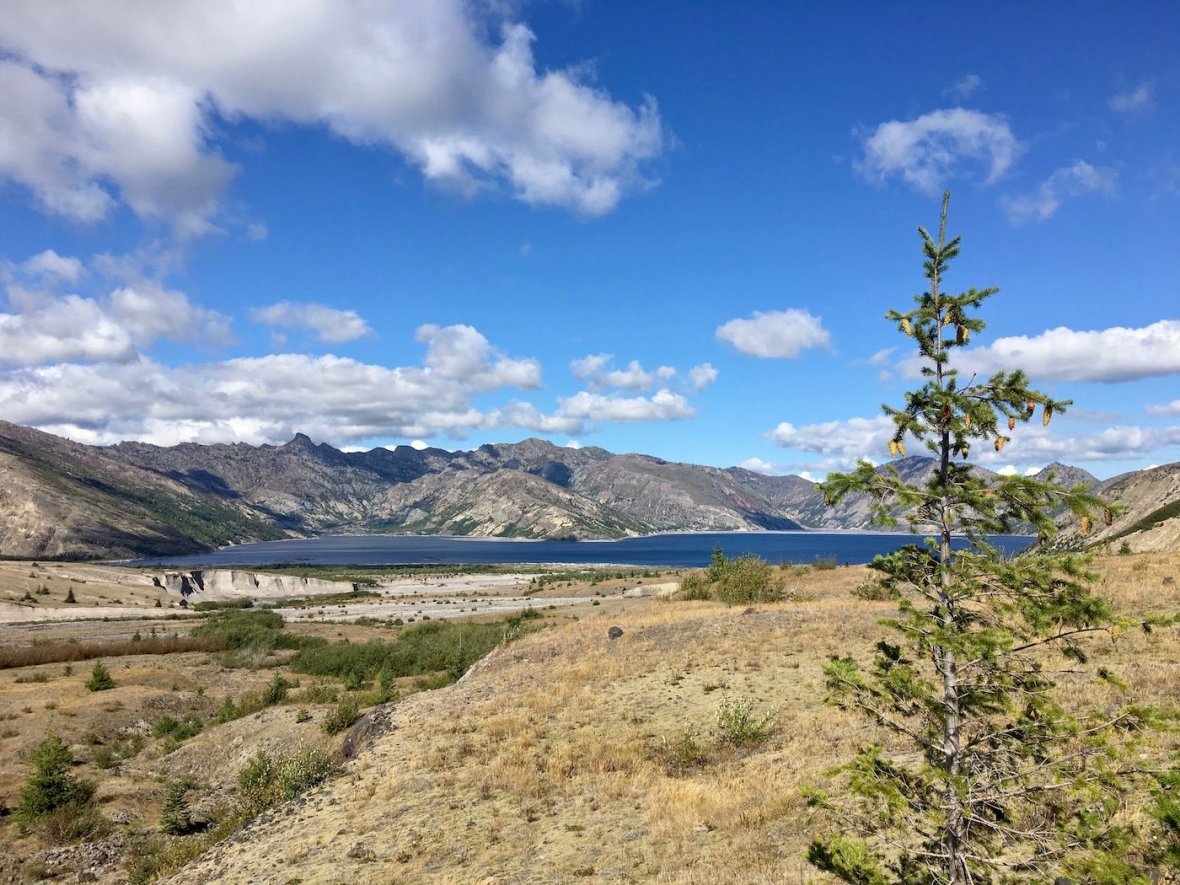 We come to dense thicket which has enveloped a sun-faded and unreadable plaque, and what appears to be a monument. 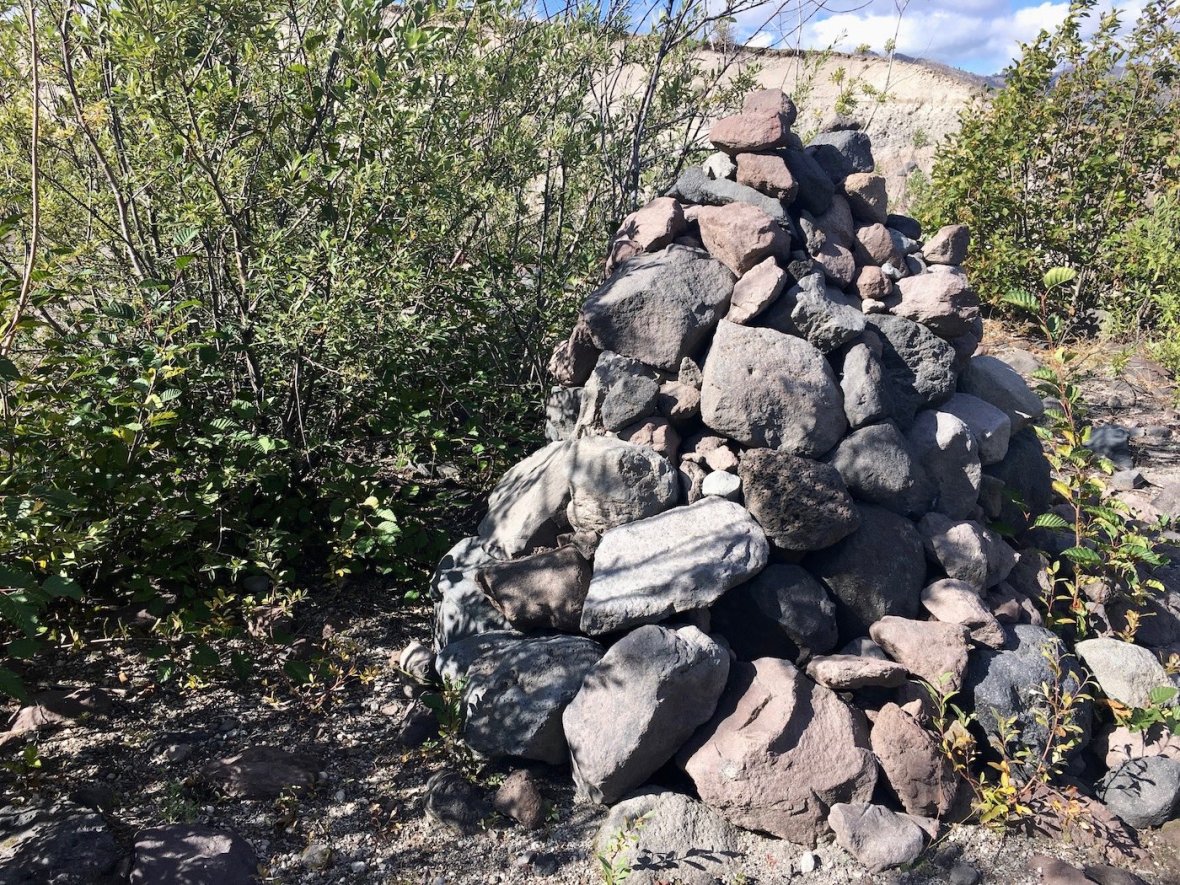 At the edge of the thicket we reach a larger creek – the creek which feeds Spirit Lake. See how deeply the water has eroded the pumice? 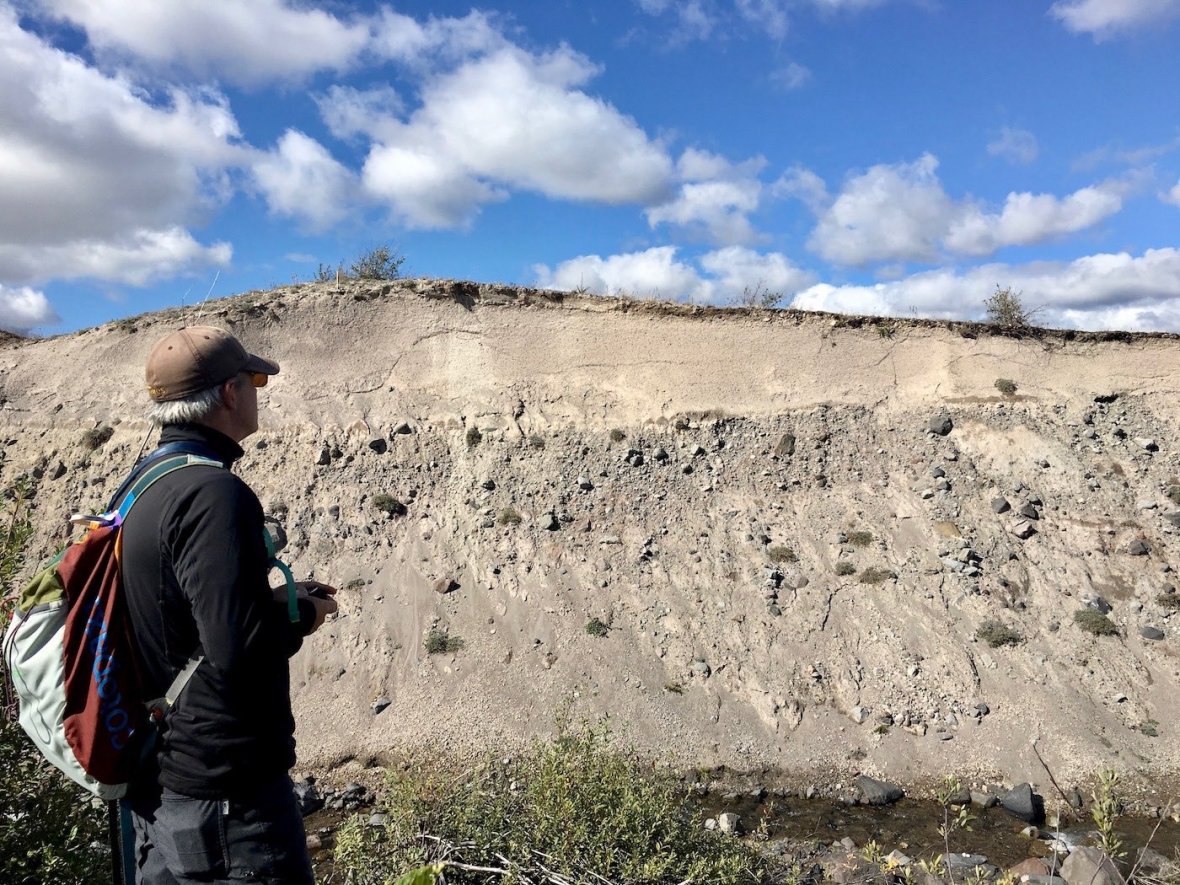 The creek is impassible and this appears to be the trail’s end. Looking at a trail map now, I believe that we actually split off of #207 and wandered down trail #207A (aka Willow Springs trail).

We retrace our steps to Windy Ridge, meeting a beautiful Garter snake on the trail. Sidenote: On our entire four-month road trip through 10 states, we only saw three snakes, all in Washington State. Weird, right? (The other two snake sightings were also Garter snakes, along the trails in Cape Disappointment State Park.) 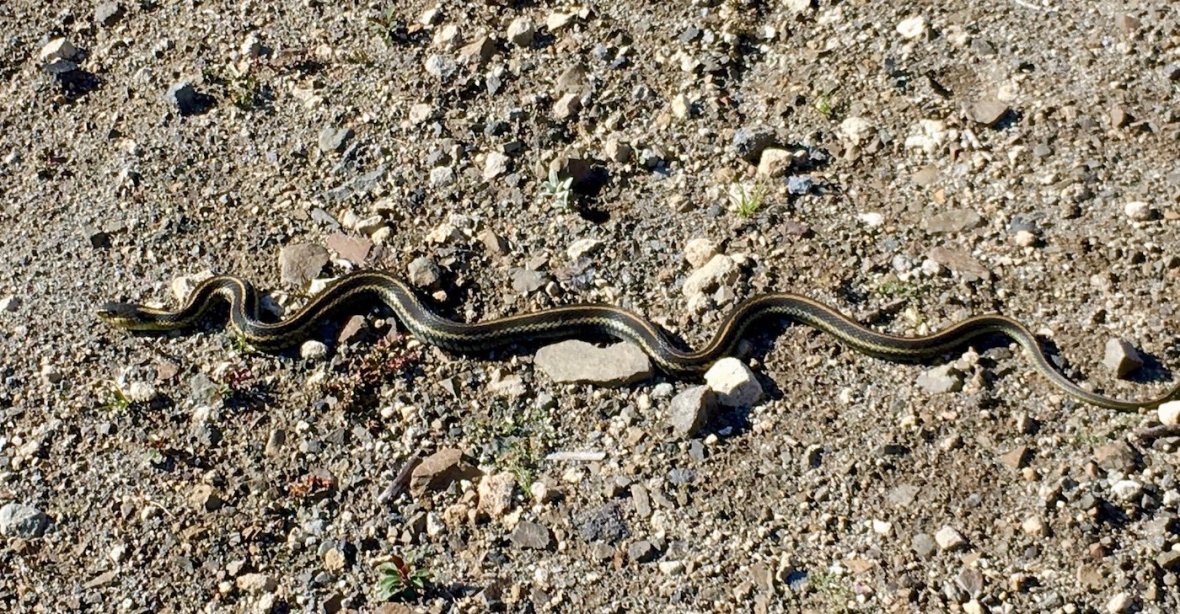 With our planned overnight still hours down the road, we depart the park sunburned, windburned, and still wanting to take in more. I wish we had set aside two days for this park. There is a nice selection of trails on the eastern side of the park, and we hope to come back in the next year or two to do more exploring.

Our visit to Mount St. Helens National Volcanic Park is undoubtedly among our Top Five Favorites of the 100+ places we will see on this western road trip.

I will leave you with a few detail photos of Mount St. Helens’ huge crater, and this advice:

If you are considering a trip to Mount St. Helens, and you haven’t already visited Josh Hewitt’s Wanderlust Travel & Photo blog, do it! Josh’s Mount St. Helens Visitor Guide is a wealth of information and is super- pretty to look at too!

You can catch up on all of our Washington State travels here.

5 Replies to “Remembrance and Rebirth: Visiting the Eastern Side of Mount St. Helens National Volcanic Monument”