When the opportunity to pet and house sit in Texas presented itself, I jumped at it. This would give me the opportunity to spend some time with family, to be in a quiet place to write, and make an easy side-trip to northern New Mexico. The month-long trip would be good for Juniper as well, because she has the makings of a great adventurer, and I was ready to show her a world outside of our local dog parks and trails.

Meet the sweet dogs that I enjoyed snuggling with: 8-year-old Winston the King Charles Cavalier and 14 year-old Ellie the Golden Doodle. (Yes, Golden. That black poodle must have had some dominant genes!). Both are rescues. Both are awesome. 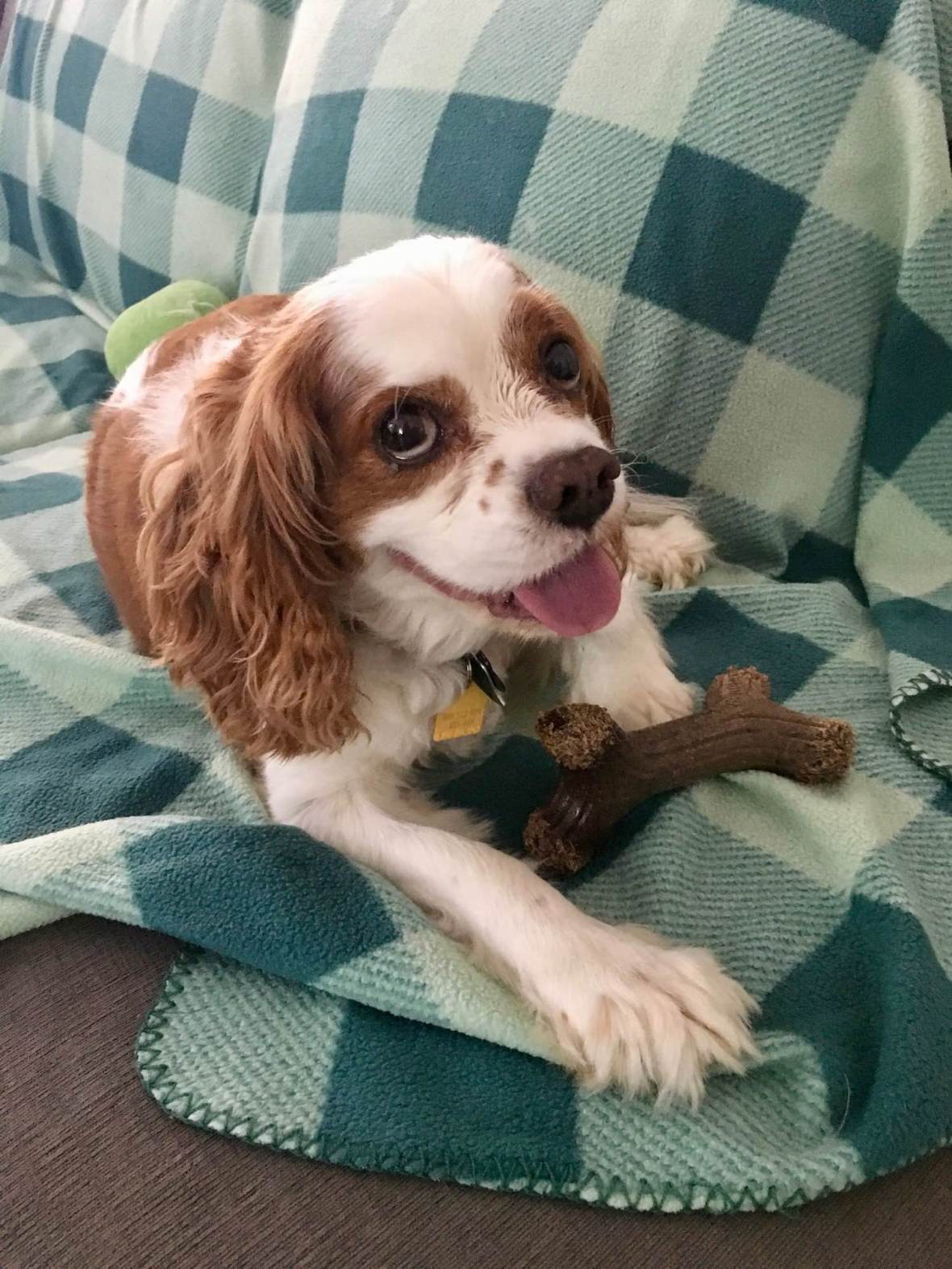 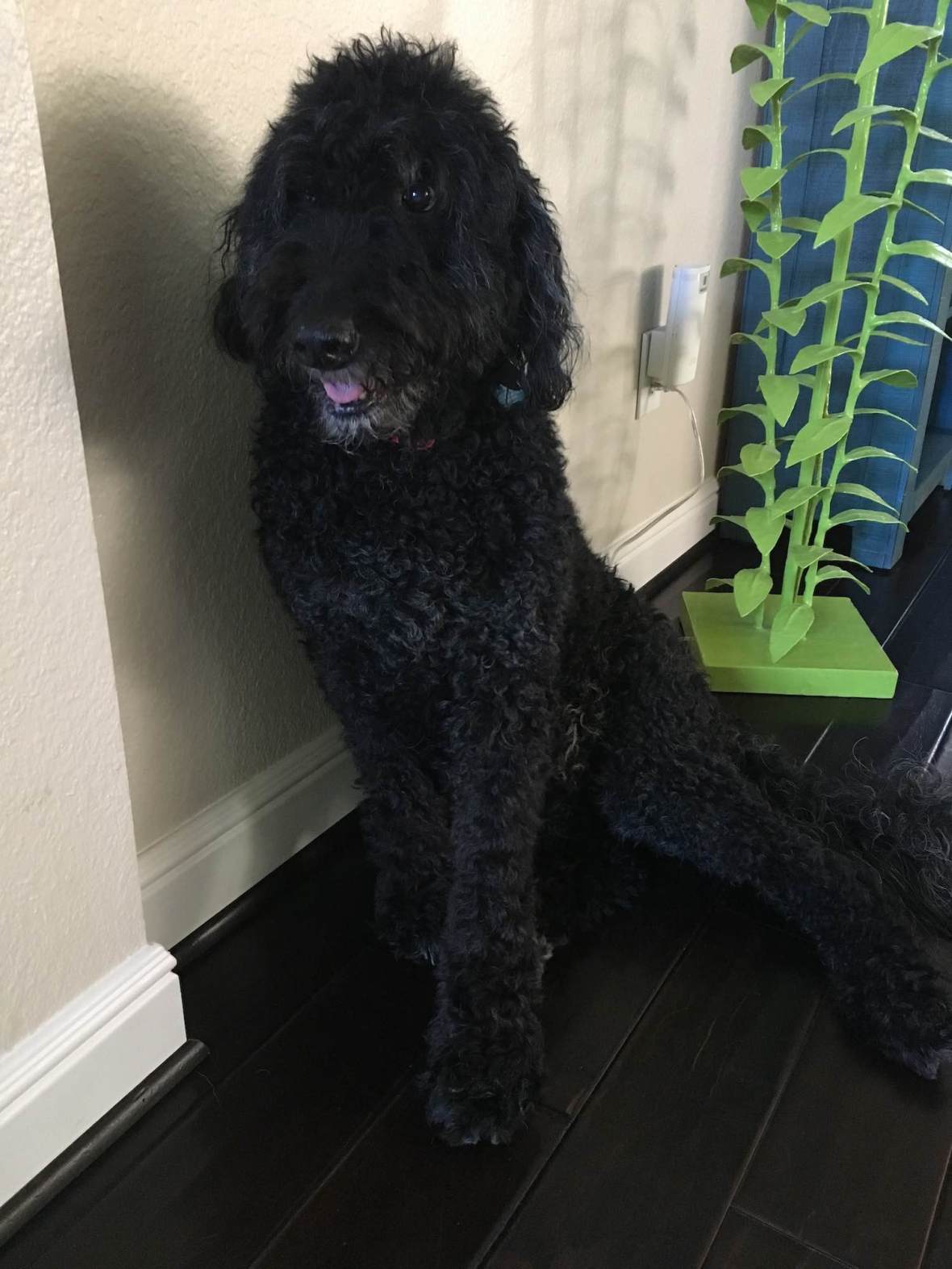 Winston and Juni became fast friends, setting my sleep schedule based on their eagerness to get up in the morning for kibble and squirrel stalking. I told them 5:40 is too early, and most days I managed to ignore their licks and climbing upon my head until after 6:00. 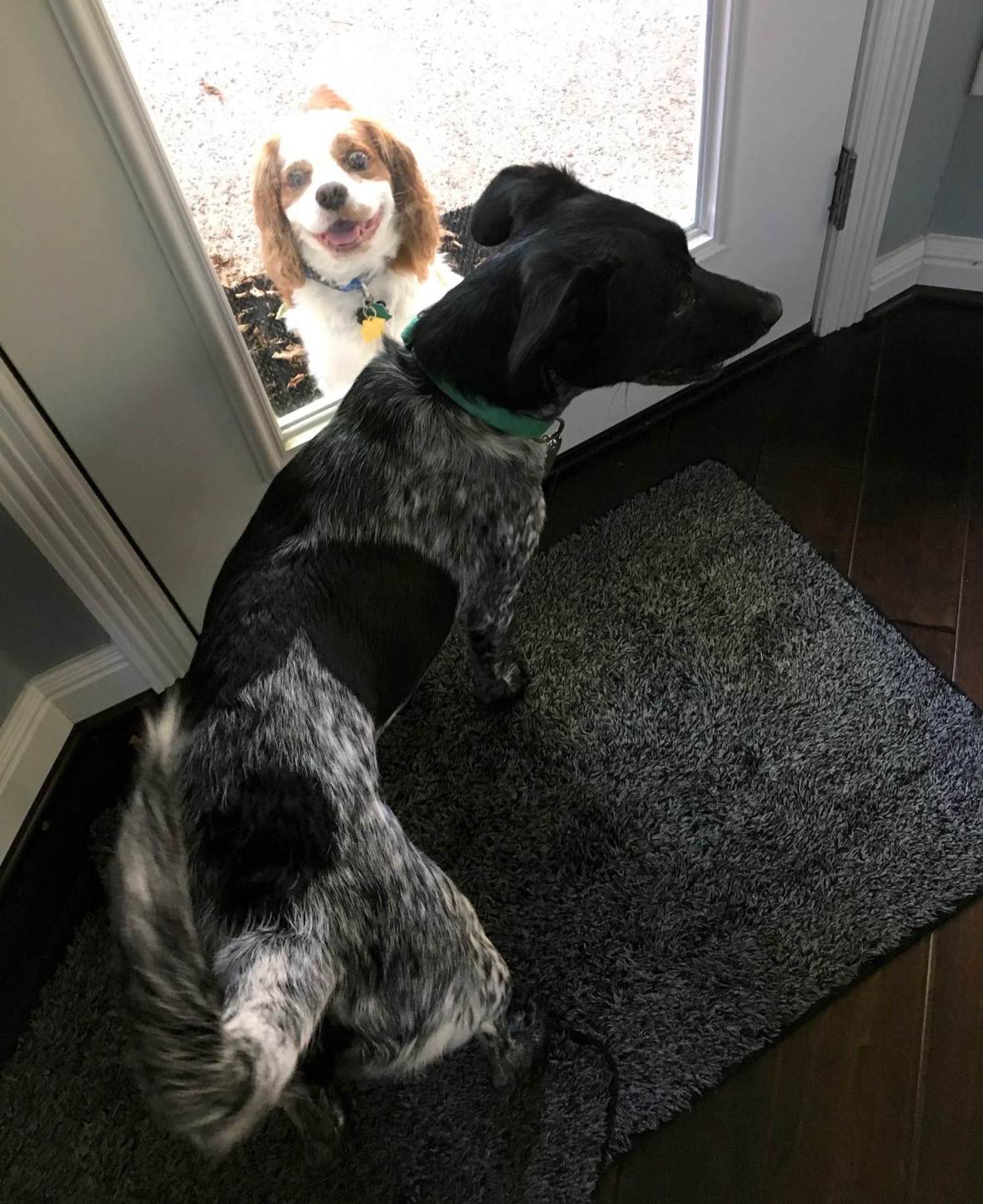 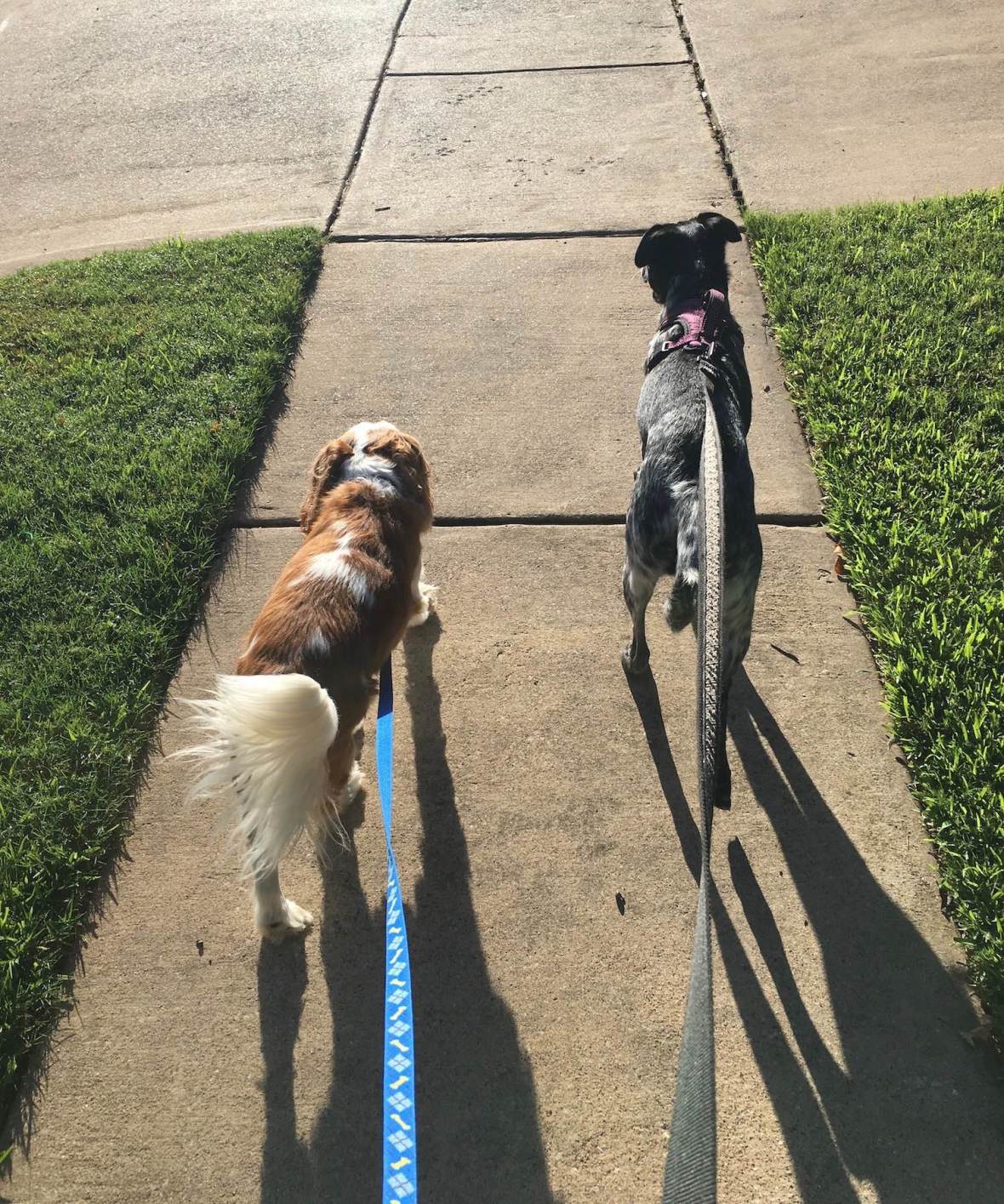 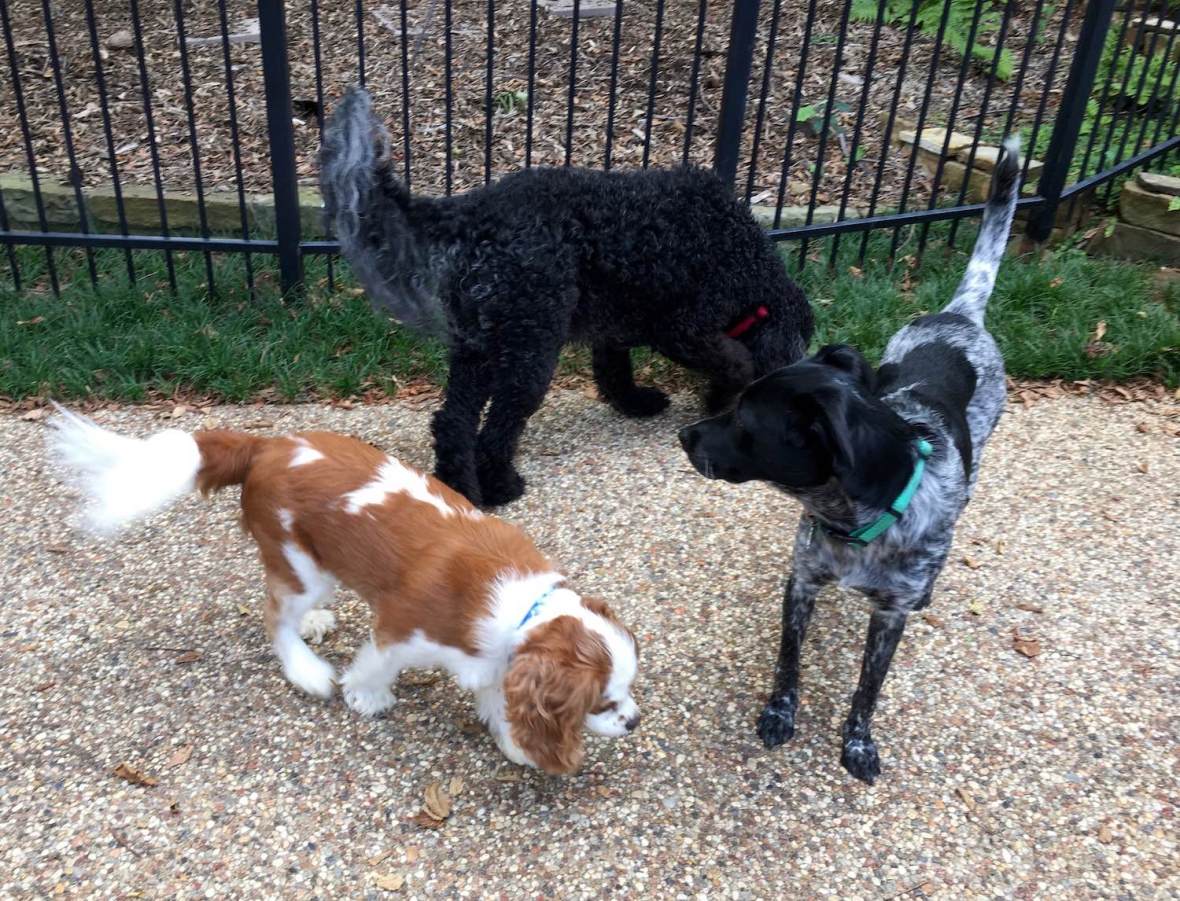 The presence of a young dog gradually revived Ellie’s playful side and she adapted her schedule to theirs, even joining in their squirrel hunts. When darkness came, the house fell quiet. I found Winston and Juni crashed out on the bed long before I was ready for sleep. 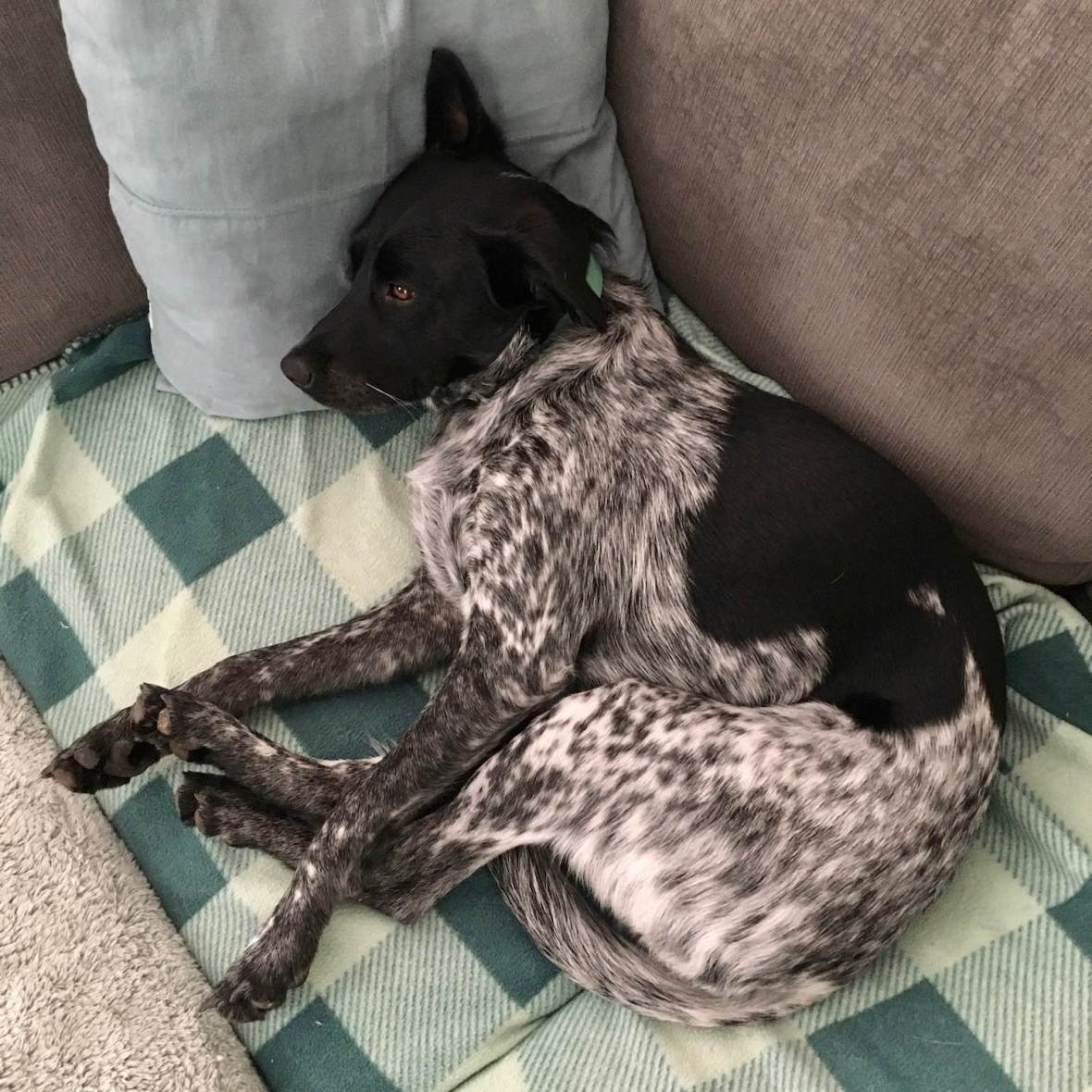 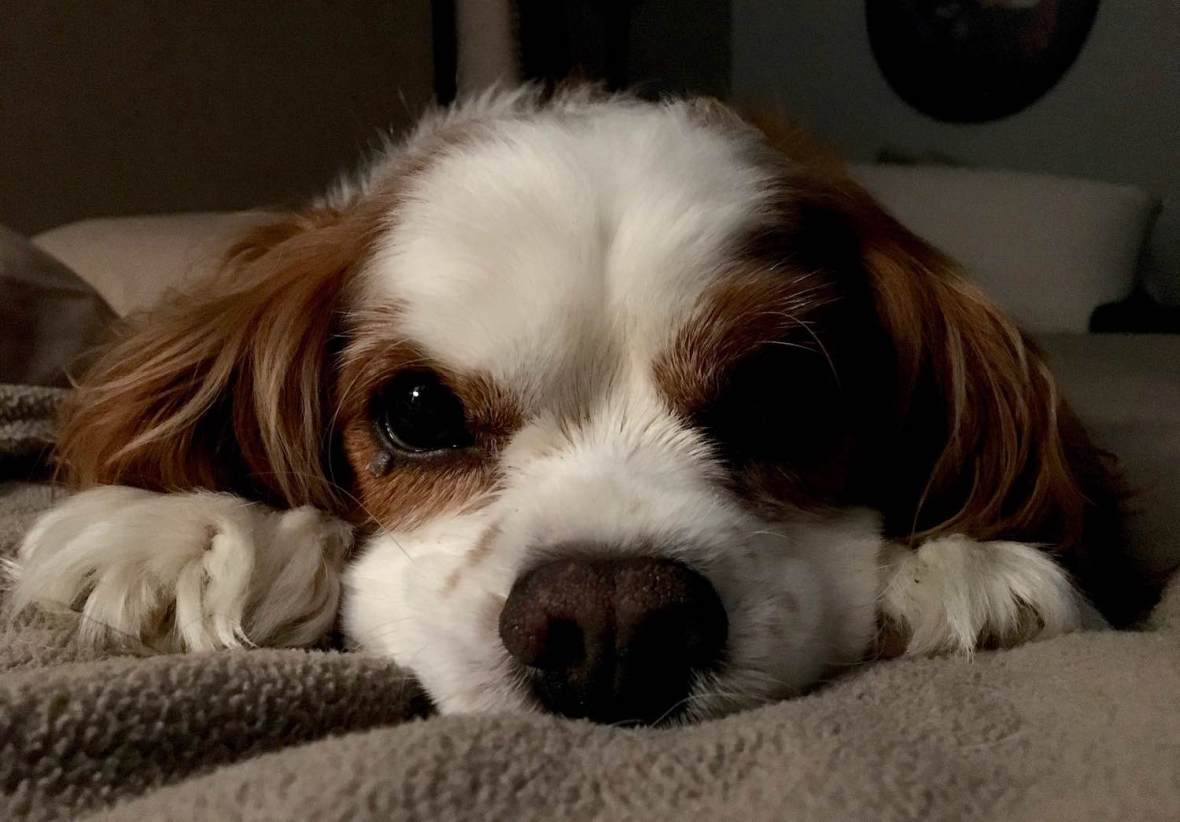 I am not good at domesticated duties. Although I used to enjoy gardening and cooking, these days I would rather run off to a forest or desert or find a dog-friendly patio where someone else will bring me good food and local beer. The two weeks I spent in Texas in July revived my interest in nesting, at least temporarily. 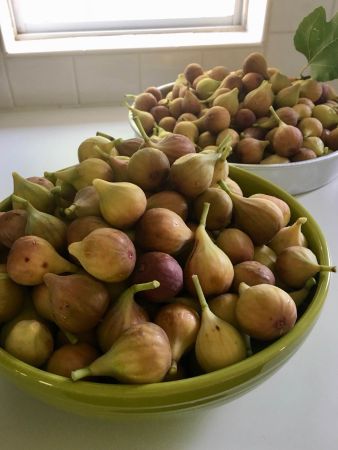 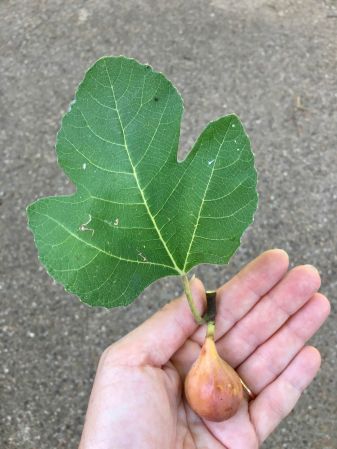 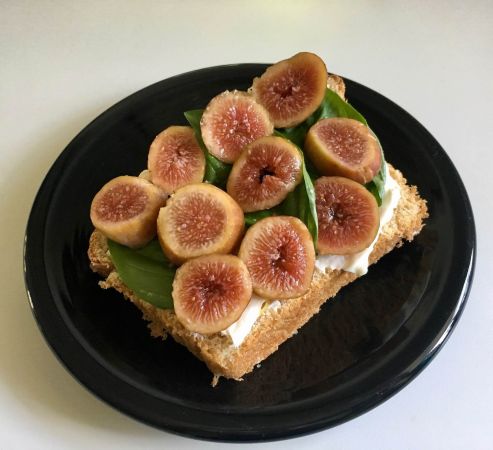 I picked gallons of figs from the giant tree next to the house almost daily, and tended a community garden plot every other day.  I harvested basil, okra, cucumbers, tomatillos, a variety of spicy peppers, one watermelon, and the last of this season’s tomatoes. 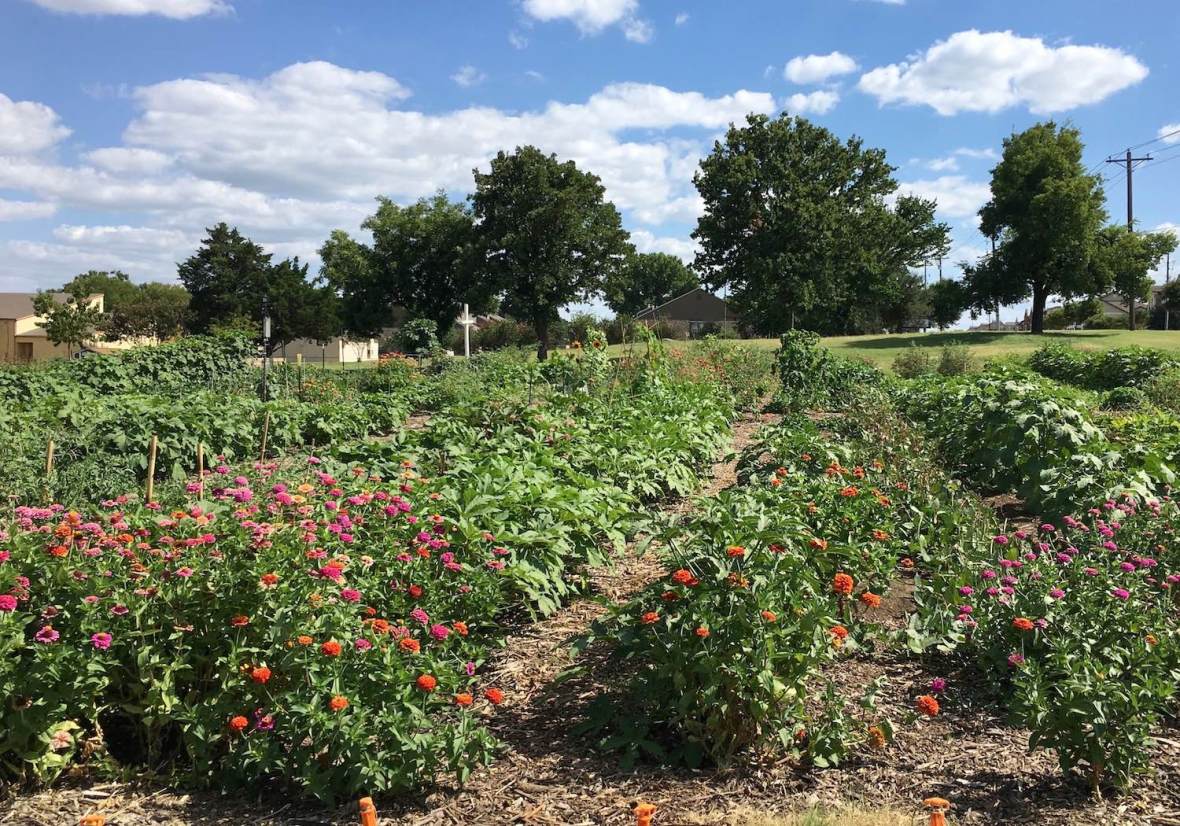 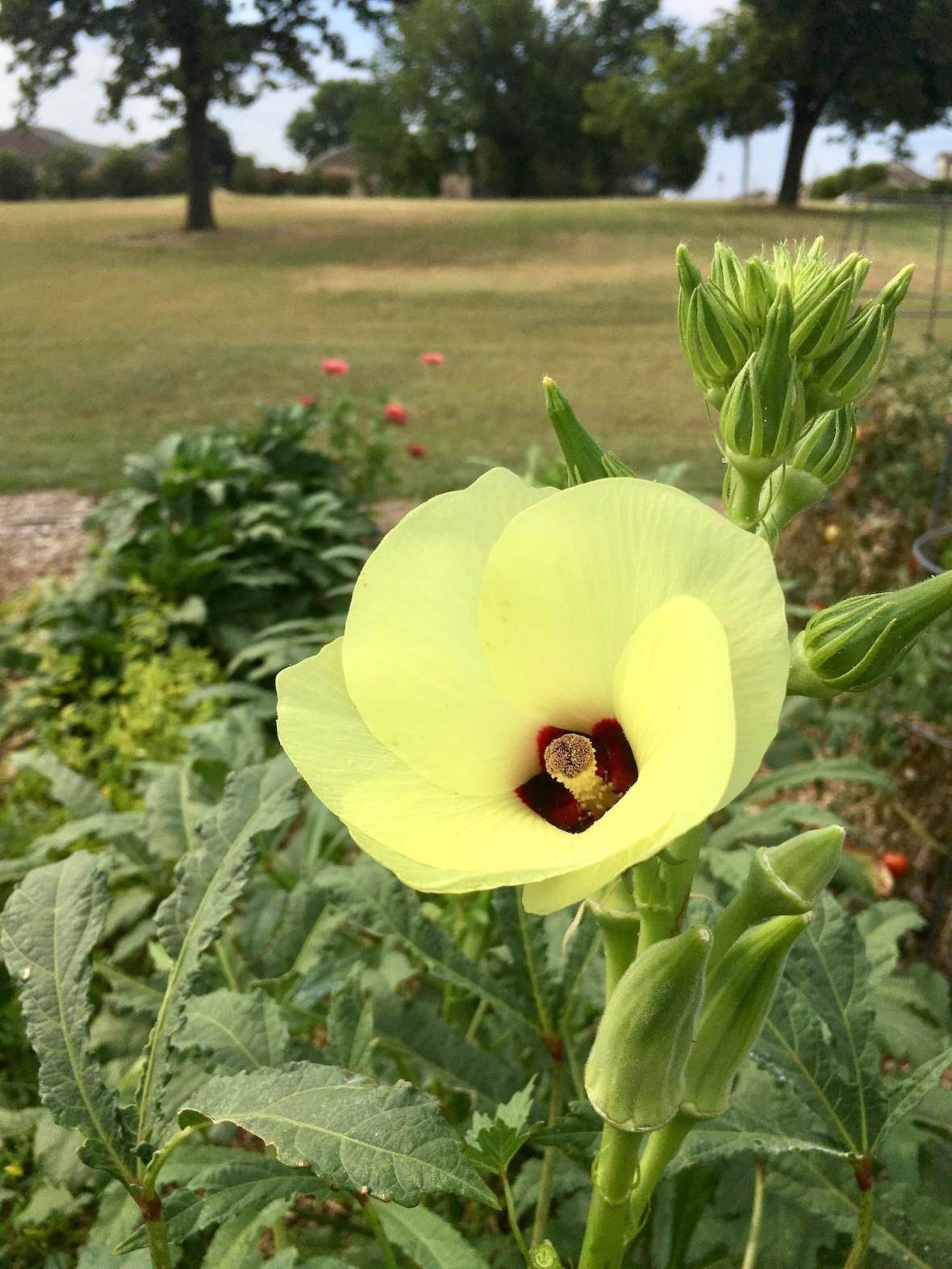 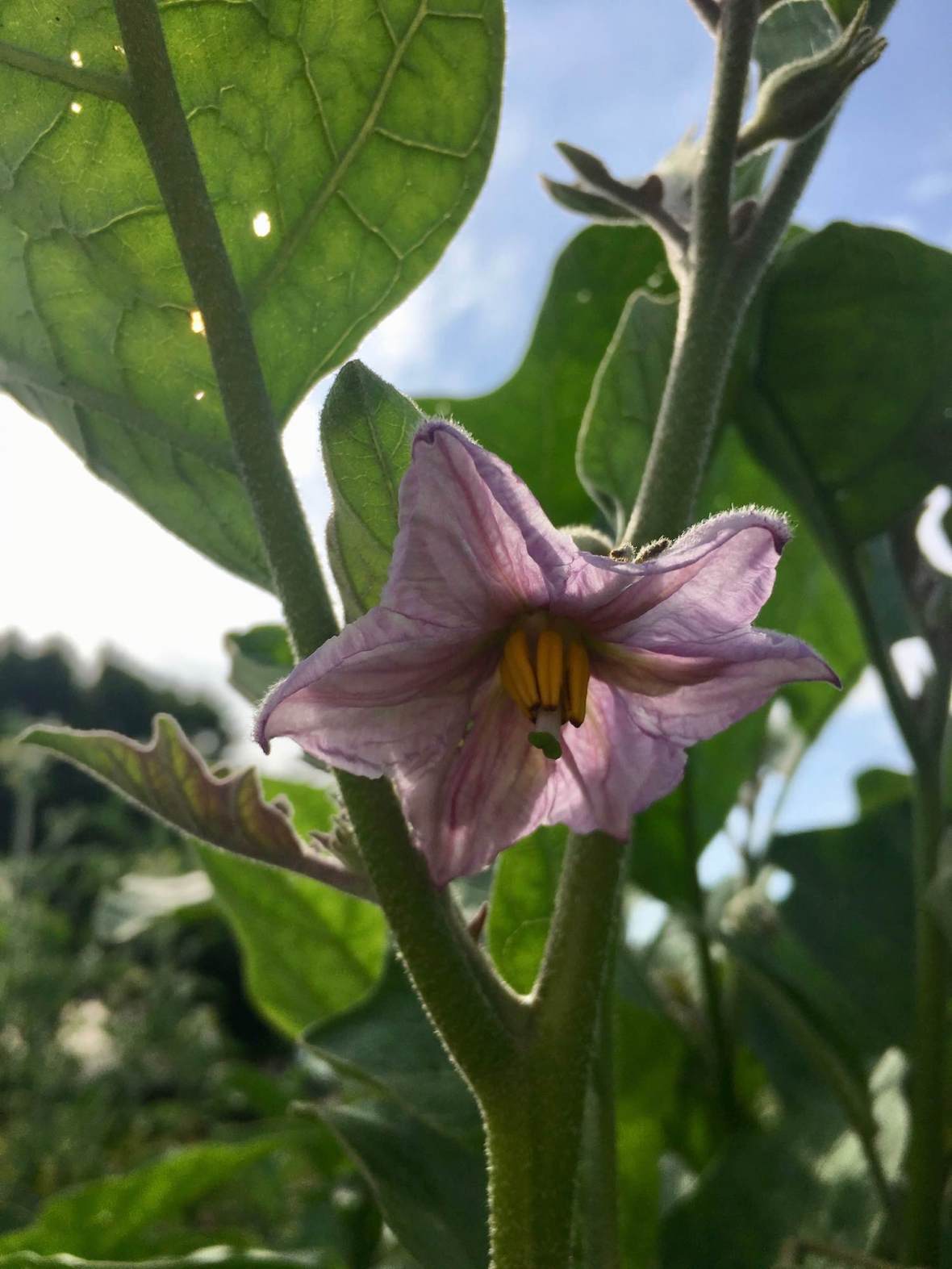 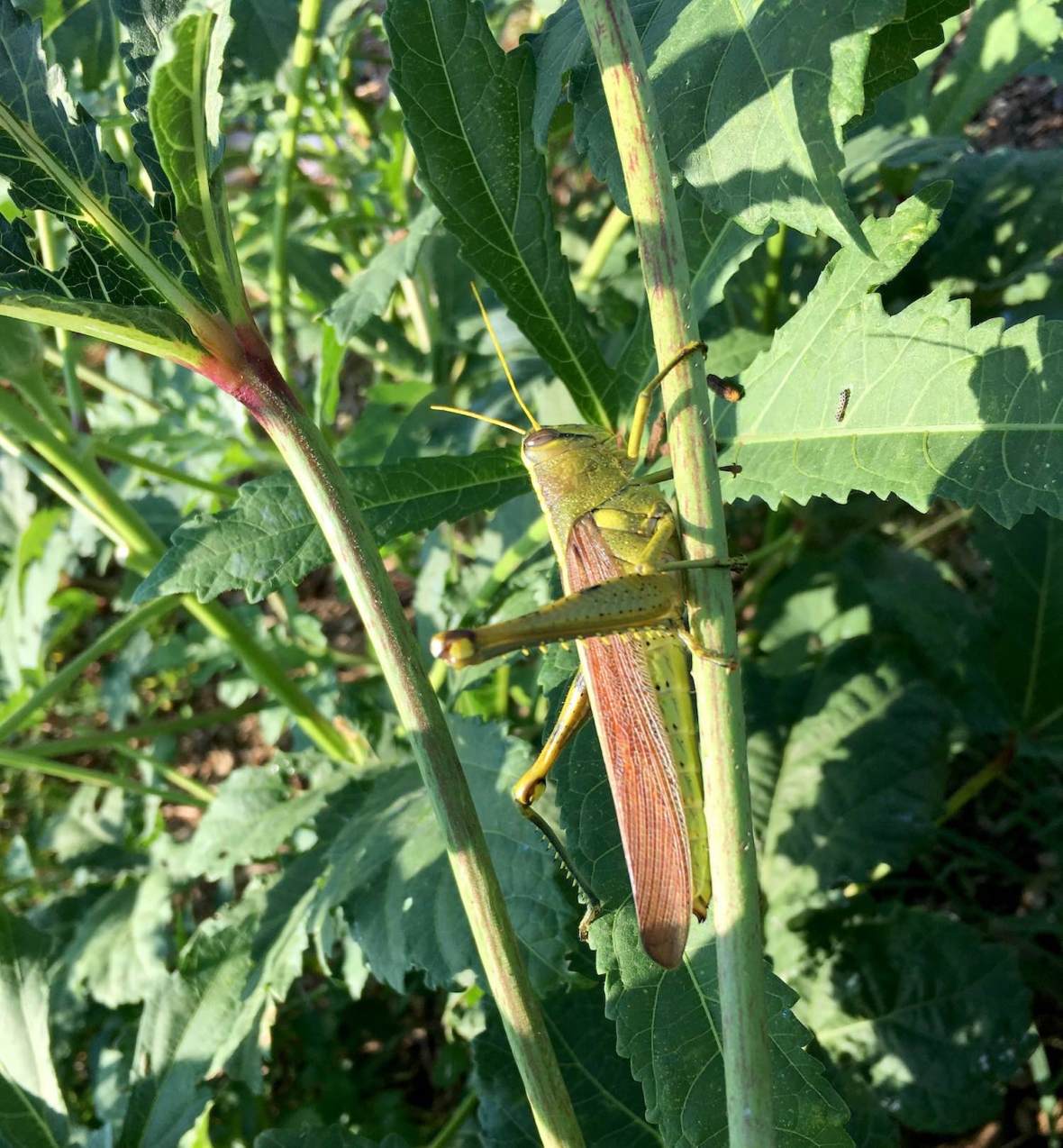 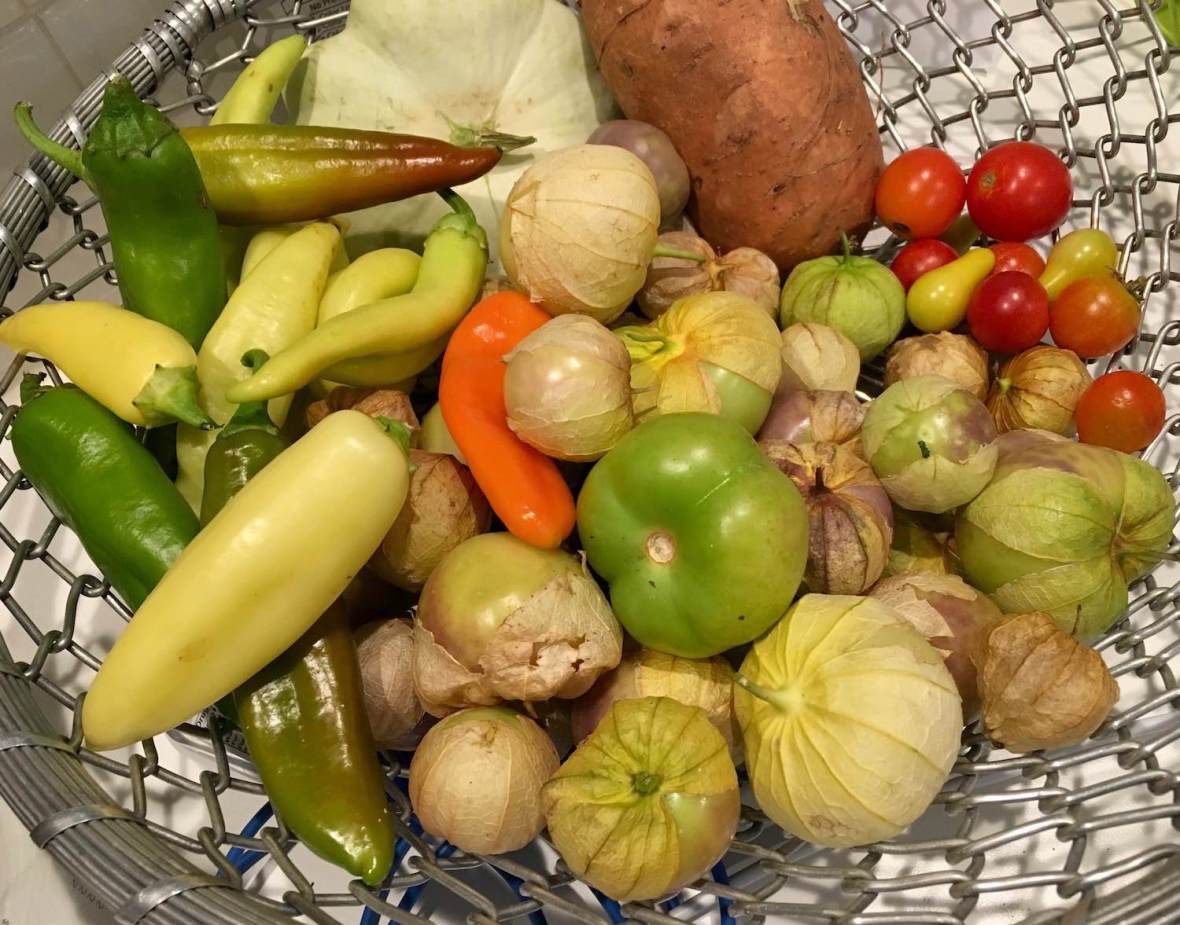 30+ pounds of produce were given away to friends and family members and donated to a local charitable organization. I had access to a fully stocked pantry and lots of other produce in the fridge, so with no excuse not to cook, I ate very well and far too much… 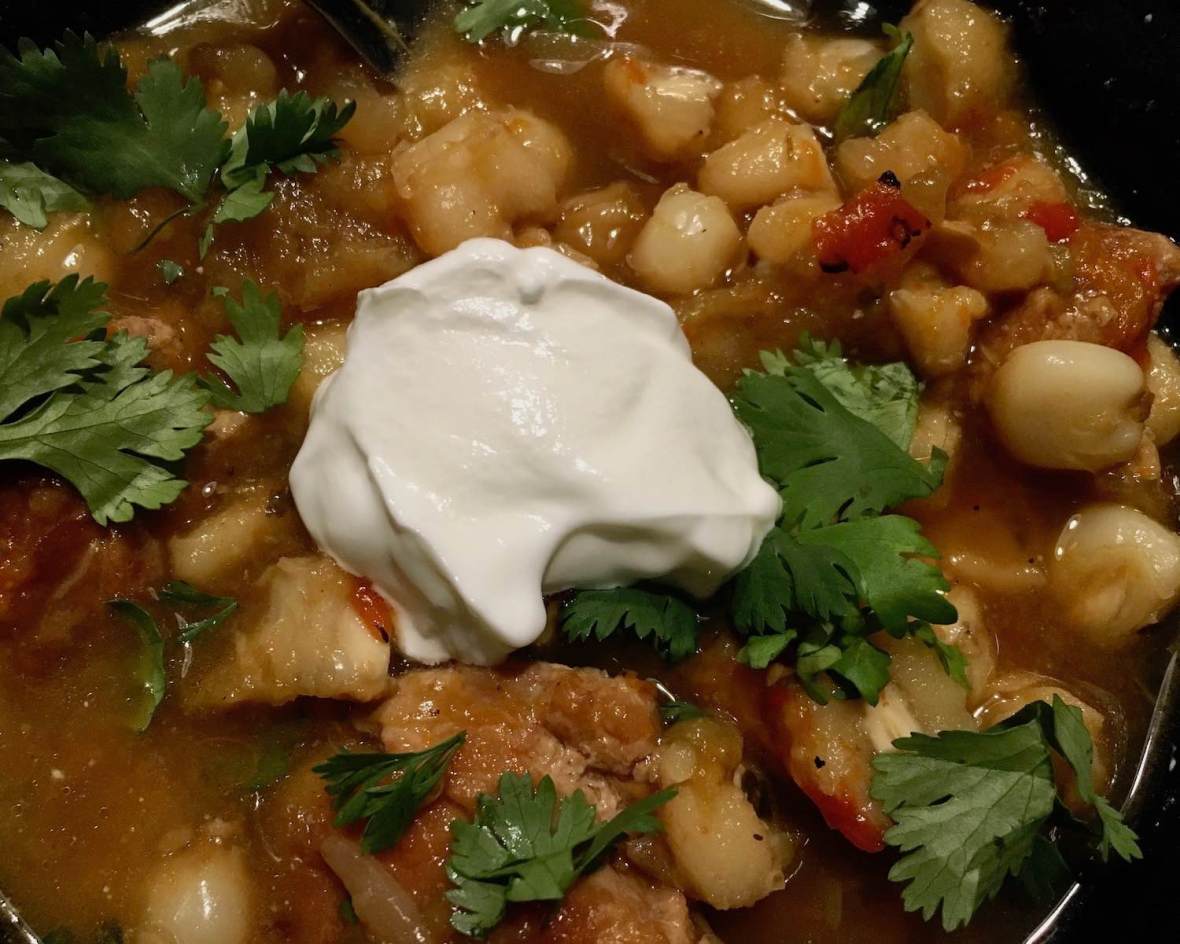 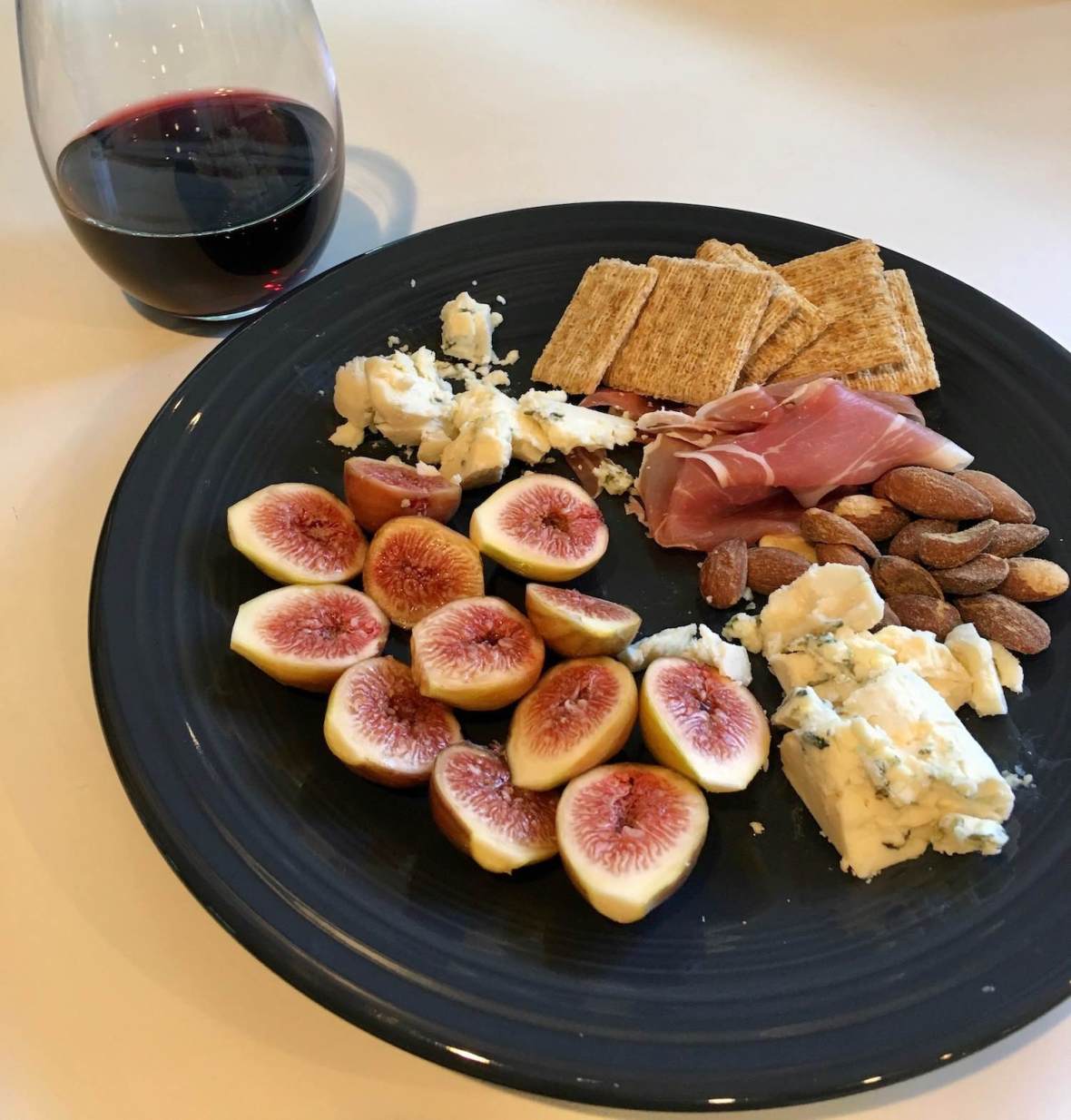 I roasted tomatillos for freezing and oven-dried figs (the former was easy with good results; the latter totally wasn’t worth the time and energy). 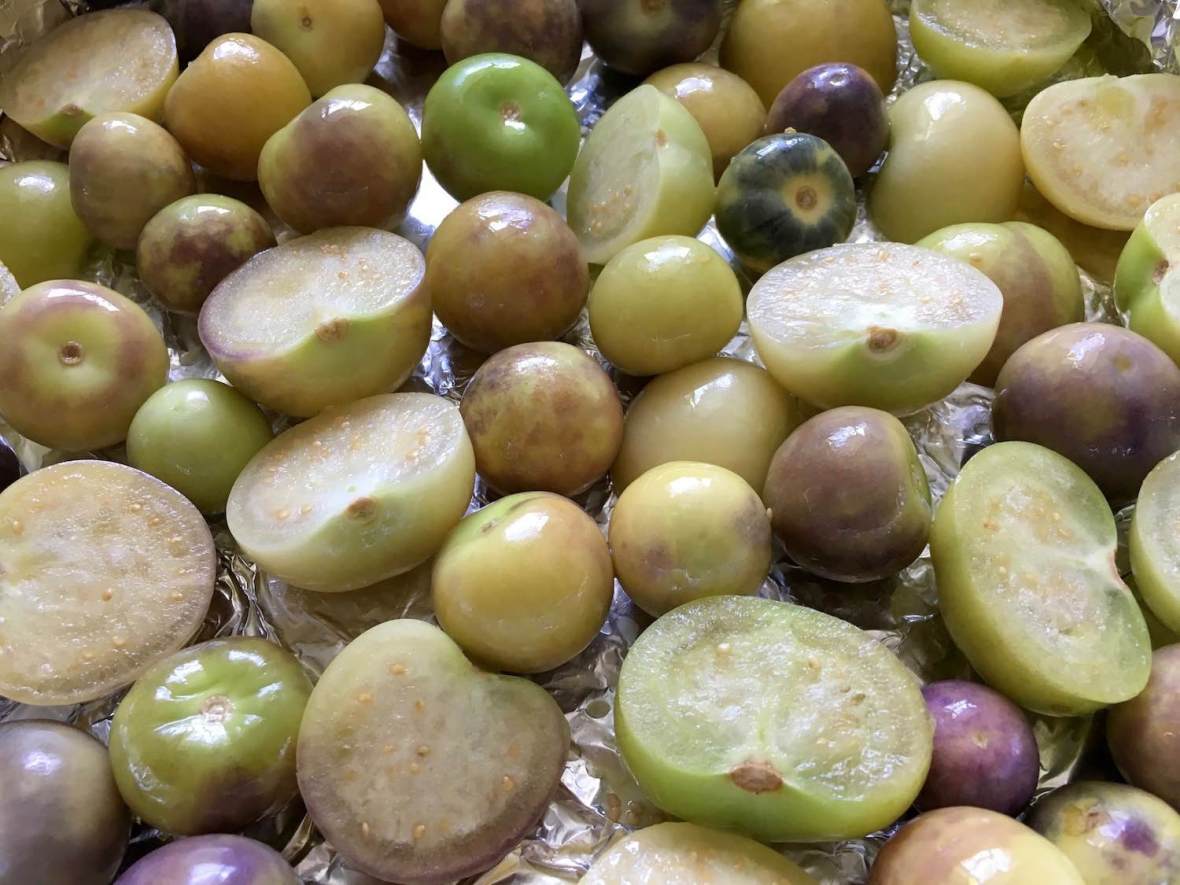 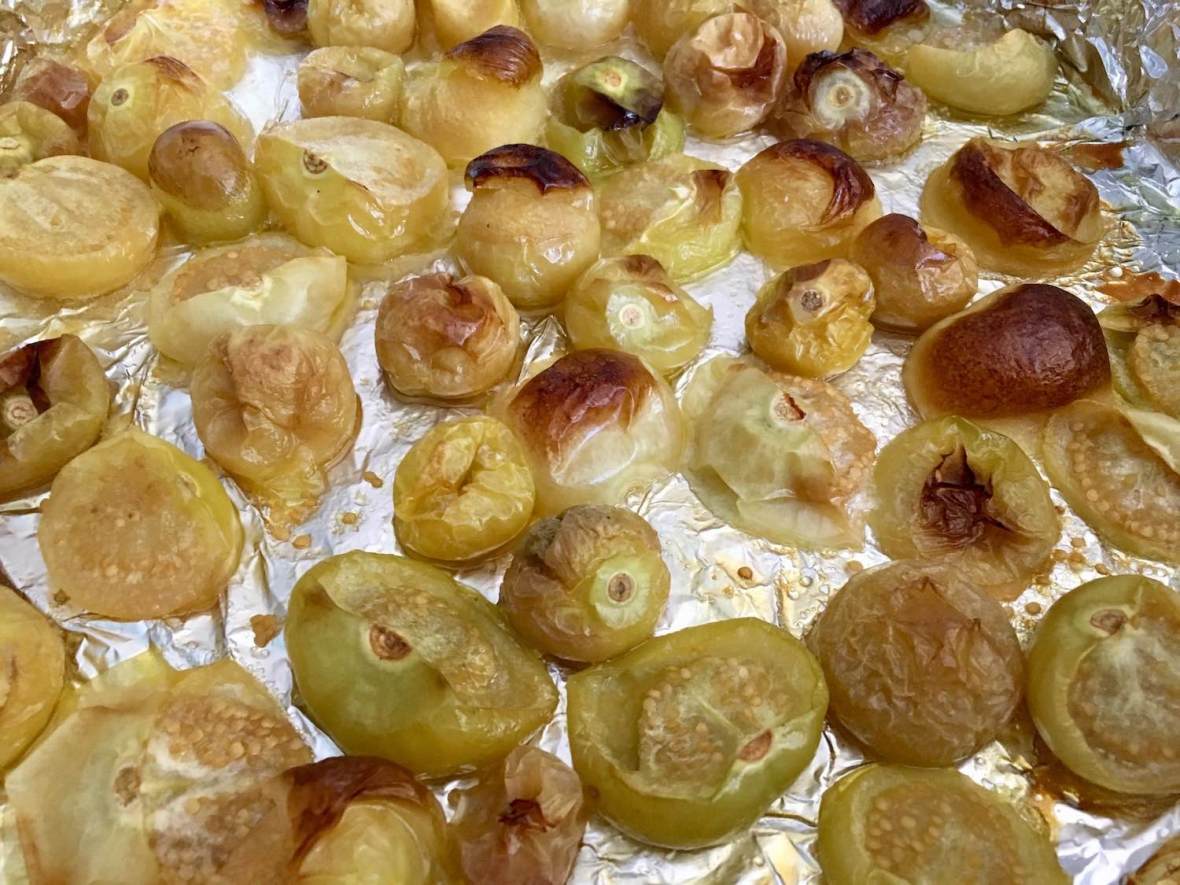 For the most part pool maintenance was easy, until it came time for algae scrubbing. I could barely lift my arms for days afterward. An entire summer of this would make my arms totally buff!

The weather was wonderful my first week in Texas, and I spent much of my free time working on the computer out by the pool, jumping in when I got hot. Floating on my back in the pool with cicada chorus for the day’s soundtrack, life was good. The dogs enjoyed the cicadas too, perhaps even more than I did. During my weeks here I witnessed all three dogs snacking on giant Cicadas. Winston couldn’t get enough of those crunchy protein-packed treats! 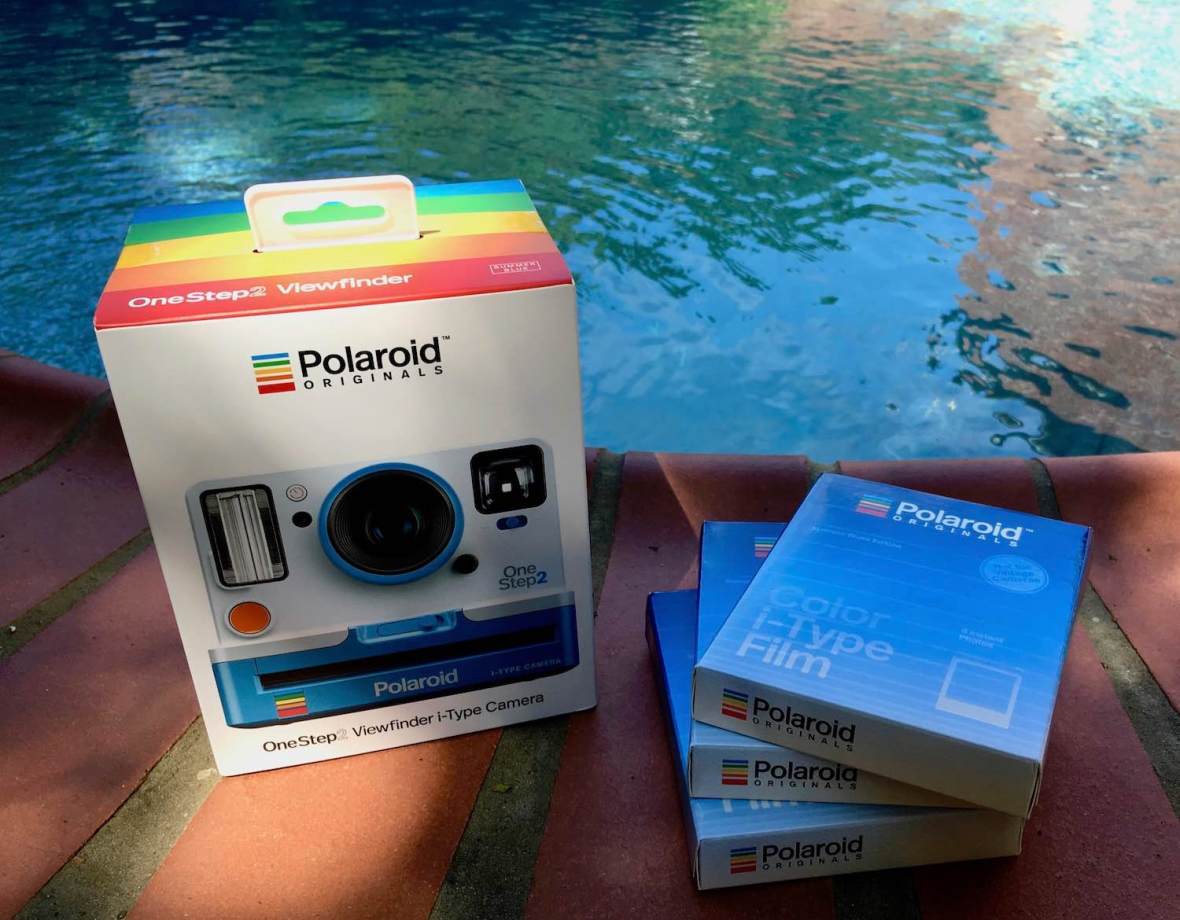 Robert and I have been shooting with vintage Polaroid 600 and SX-70 cameras for about ten years now, so it was a sweet surprise when my birthday package from him arrived: A new Polaroid camera! The I-Type OneStep2 Camera has some cool features not found on vintage Polaroid cameras, including a timer and built-in sun shield to prevent over-exposure when the picture ejects from the camera. The camera’s battery is rechargeable, so picture taking is much more eco-friendly than using the vintage cameras, whose film packs each have a battery built in. I shot a few polaroids while in TX, mostly pictures of my Dad’s sailboat. 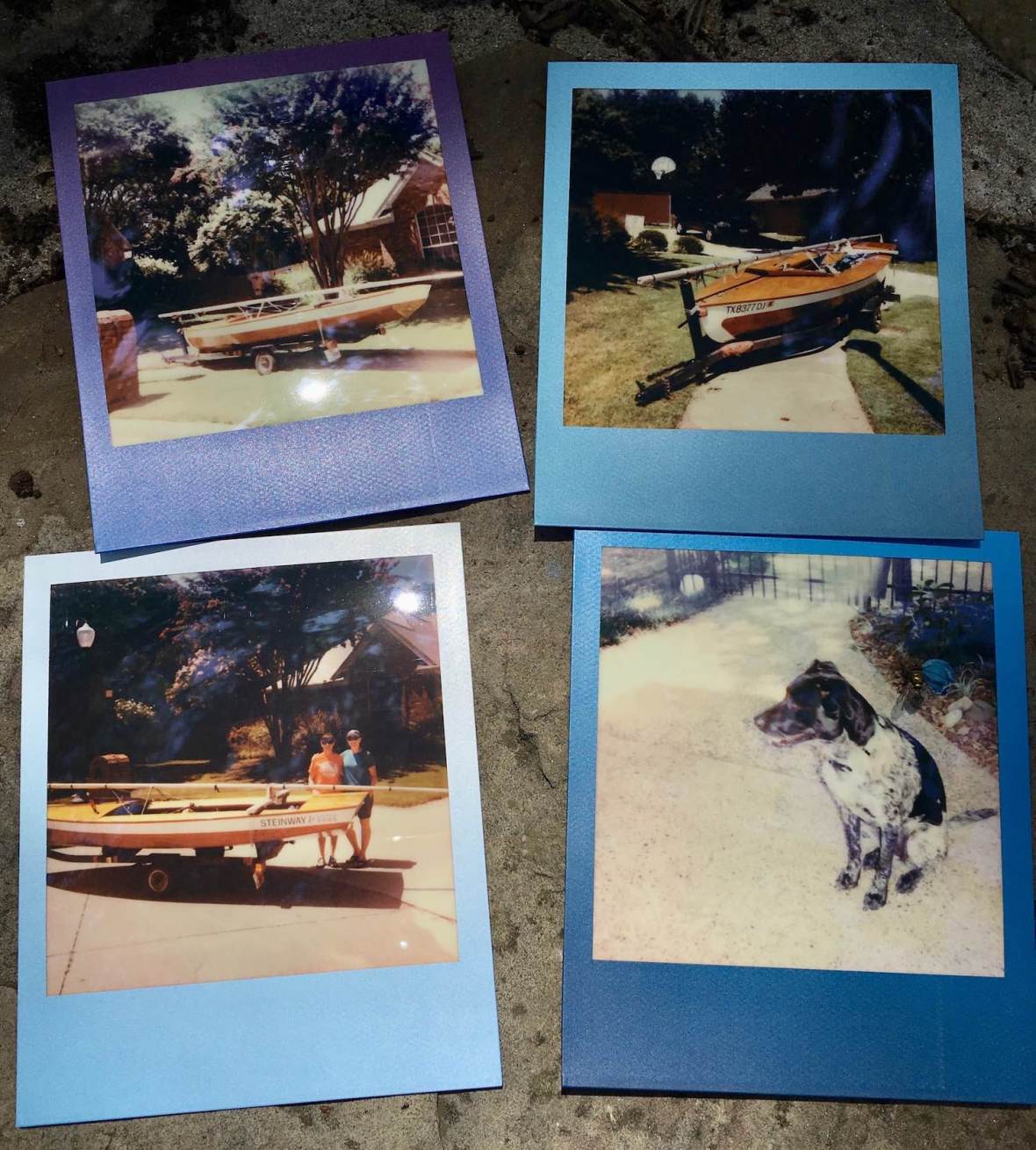 Saying Goodbye to the Boat

Even my boatbuilder father had quit sailing years ago (in part due to health issues), and sadly the antique wooden sailboat he had so lovingly restored in the years prior to his passing had been sitting trailered for three years, sailed only once in that time. A wooden boat needs to be in the water regularly, and additionally we had no place to store the boat properly. So rather than see Steinway the Snipe deteriorate, as a family we made the  difficult decision to sell her to a Texan who would use her and give her the care she deserved. It was an emotional day, but we felt good about the boat’s new owner, who vowed to give our family the first option to buy Steinway back one day should he ever stop sailing her. 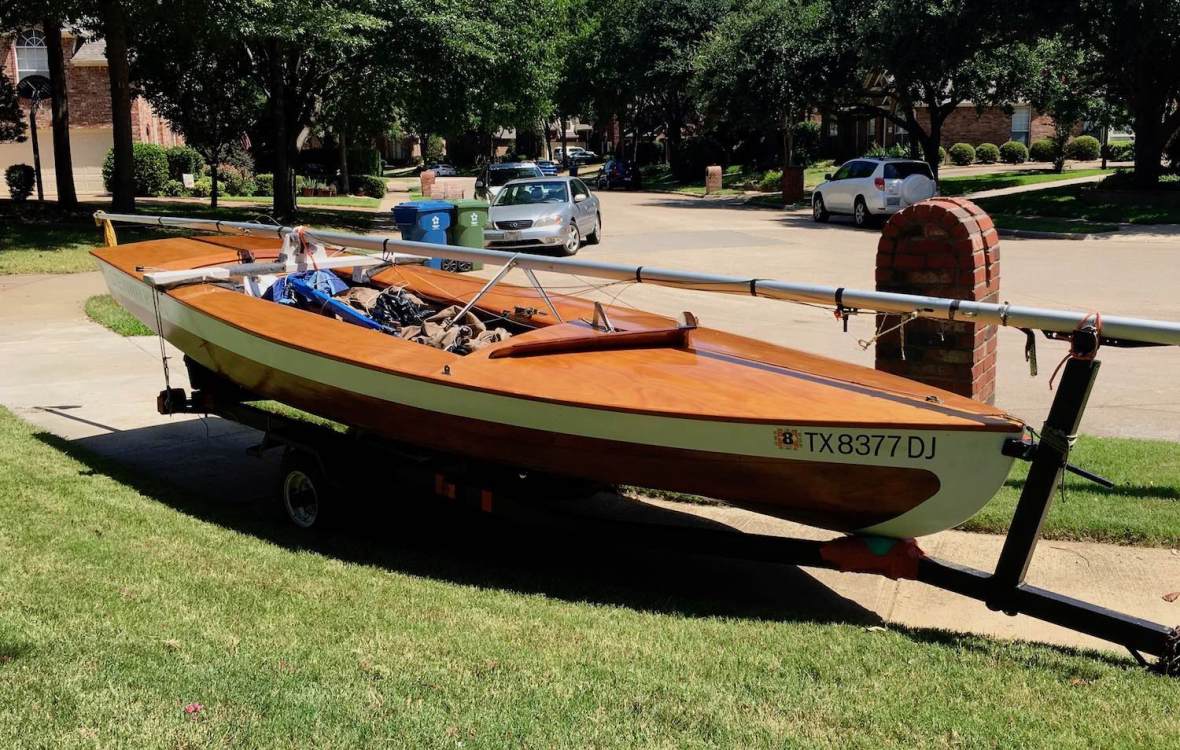 Saying goodbye to Winston and Ellie was hard too. Ellie is a near-perfect dog, and having known her for 12 years, I love her as my own. She is in amazing health and is still quite active, yet because of her advanced age, now each time I leave I wonder if I will see her again. Winston and Juni had become besties, and as I was leaving Winston rushed out the front door and leapt into my car, hoping to join in our adventuring. I swear I didn’t stage this picture. 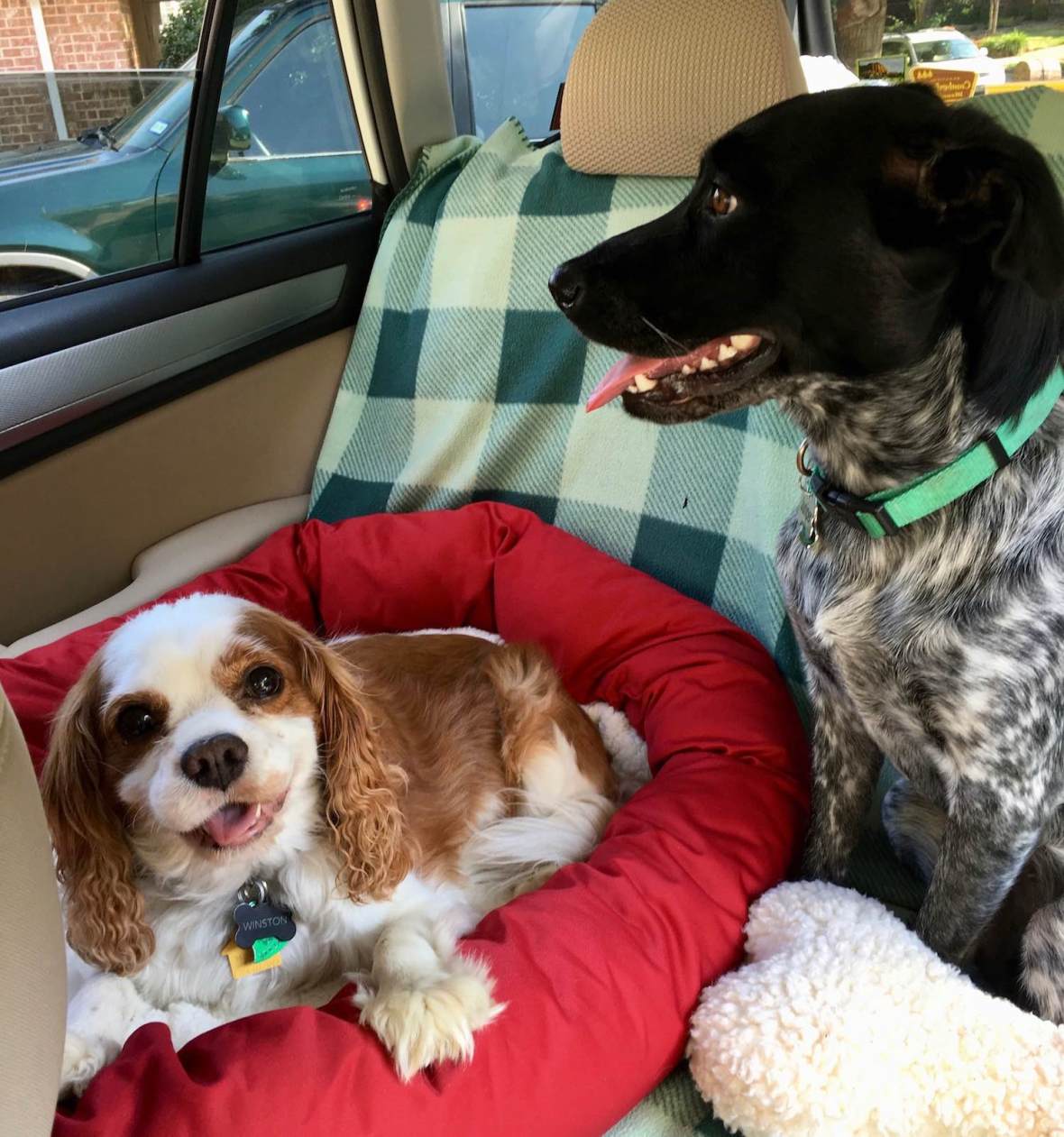 After depositing Winston back in the house, Juni and I were off to Conchas Lake…

Click here to see a preview of my southwest adventures with Juniper.